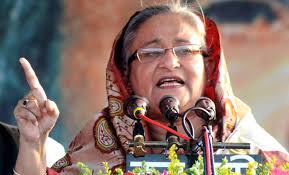 KOLKATA/ DHAKA: Just before her delayed India visit being rescheduled for first week of next month, “Begum Hasina’s blaming RAW (India) and US for Khaleda Zia’s rule,’’ would fetch a bad taste for New Delhi, feel Awami League think thanks.
Hasina’s blaming RAW and US for Khaleda Zia’s rule would have been treated as unusual even in domestic politics, but now, it’s simply bad,’’ added another liberal.Incidentally, it’s widely believed Hasina delayed her visit to New Delhi, `most powerful neighbour under Chinese influence,’ but finally she, observers believe, would visit India.
And Dhaka-based observers believe she would sign a defence deal with India and hold talks on river sharing with India and other sensitive issues, especially information sharing regarding the Pakistan-propelled terrorists.

Interestingly, attacking each other (Hasina-Khaleda) “leaves an impression on foreigners that in Bangladesh whichever party is in power, stays there with some one’s blessing.’’It’s a premature political rhetoric on part of Hasina which would neither fetch Dhaka a good name nor as an individual, believe observers.

Especially when she’s going to India with an old friendly image,’’ observed a Dhaka-based coloumnist.According to a Dhaka-based writer, Khaleda Zia’s Bangladesh Nationalist Party (BNP)’s electoral prospects touched an all time low, “so you needn’t have to prove who blessed BNP leader.Actually, intellectuals would now ask her same question much the same way with whose blessing are you in?’’  Ask an academician.
However, a dominant intellectual section in Bangladesh believe, despite all these, New Delhi will ignore her provocative comments and see to it that in a changed South-East Asian situation, New Delhi would help Prime Minister Hasina and remind her that a friend is always a friend.