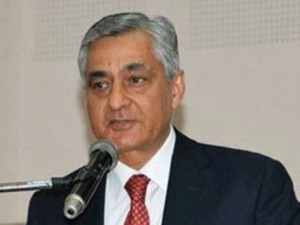 NEW DELHI: The Supreme Court collegium will respond next week to government on the revised memorandum of procedure, a document to guide appointment of judges to the top court and the high courts, Chief Justice of India TS Thakur said on Sunday.
He said the document, prepared by the government to enhance transparency in judicial appointments, will be sent back to the Centre next week with the comments of the Supreme Court collegium.
Justice Thakur said External Affairs Minister Sushma Swaraj, who headed the Group of Ministers to draft the memorandum, had spoken with him on whether the collegium was ready with its response.He said Ms Swaraj was abroad and the Supreme Court judges were busy with their retreat at Bhopal and the Chief Minister-Chief Justices conference.
“Now she is back. We will meet her and give our comments,” he said addressing a press conference on the decisions taken at the conference of chief ministers and chief justices of high courts held in Delhi.
On whether the judiciary was ‘okay’ with the text of the memorandum, Justice Thakur said the core of the document, based on a Supreme Court judgment, will remain “unaltered” that the collegium will make a recommendation.”Things like the number of judgments a candidate has delivered are contributory in nature,” he said, adding that judiciary is ready for the new document. “We have no problems”.
A day before Holi, the file relating to the draft MoP was sent to the Chief Justice of India (CJI).The collegium consists of CJI and four senior judges of the top court. If the draft is ratified, it would be put in public domain by the Department of Justice in the Law Ministry. If changes are suggested, then the Law Ministry would have to redraft it.
The NDA government wants both the Centre and state governments to have their say in recommending candidates for appointment to the higher judiciary.While delivering its verdict on ways to make the collegium system more transparent, the top court had asked the government to rework the MoP in consultation with the states and high courts.
The CJI said the collegium has now cleared all proposals sent to it in six weeks. While 145 judges were either elevated as permanent judges in the high courts or were appointed as additional judges, 169 proposals were still pending with the government, he said.

He wondered why the government was delaying the appointment of judges when there was a huge backlog of cases.Responding to a question on the delay in clearing names, Law Minister DV Sadananda Gowda said verification by the Intelligence Bureau takes time.
The CJI was of the view that IB should be asked to submit its report in a fixed timeframe. “The Director, IB should depute more men. The government is very resourceful. In fact there is no system to track the recommendations made by the collegium. We should have a system to know where the recommendation is. We don’t know whether a secretary is sitting on it or it is with the PMO or Law Ministry,” he said.
He said most of the appointments were not fresh in nature. Additional judges have been made permanent judges in most cases. Which means that no fresh appointments were made against vacancies.
“How much time does it require when there is an avalanche of cases,” he had said this morning in his address while referring to delays in appointing judges.The CJI said 50 per cent of the recommendations made by the high courts were rejected by the collegium as “we have raised the bar”.
Referring to suggestions, including that from the Prime Minister, that judiciary should cut down on its vacations, he said, “we don’t go to Manali. Judges of constitutional benches write their order…When one side is ready, the other is not. Ask the Bar if they are ready,” he said.