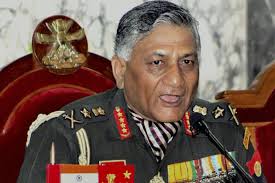 NEW DELHI :  Former Army Chief General VK Singh, who was engaged in a bitter battle with the government over his age, will formally join the Bharatiya Janata Party (BJP) today.”I’m going to continue to serve my country. I am joining a party which is nationalist and decisive and can take the country forward,” he said today.General (retired) Singh had met BJP leader and Madhya Pradesh Chief Minister Shivraj Singh Chouhan at his official residence in Bhopal last week which fueled speculation about his joining the party. The ex-army chief, though, described that meeting as “courtesy” visit.
General (Retd) Singh had, in October last, ruled out joining the BJP, saying that he was firmly behind veteran activist Anna Hazare in his crusade against corruption.
The statement had come close on the heels of his sharing the dais with BJP’s prime ministerial candidate Narendra Modi at a rally in Haryana, attended mostly by ex-servicemen.
General (Retd) Singh was the first serving military chief to drag the government to court in the hope of establishing that he was correct in claiming that he was born in 1951, not 1950. Documents with the Army reflected both dates. In his petition in the Supreme Court, he had asked for an explanation of why his claim that he was born in 1951 and not 1950 had been rejected by the Ministry of Defence.
The Supreme Court, however, had upheld the government’s decision on the issue, saying it was not in favour of entertaining the Army Chief’s petition.