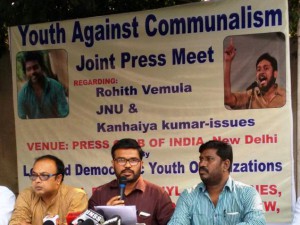 NEW DELHI: Accusing the NDA government of using Rohith Vemula and JNU incidents to “divert attention” from its “failure” in keeping poll promises, youth wings of the Left and other parties on Sunday decided to intensify their stir against the Centre.
They demanded dropping of sedition charges against the JNU students and action against Delhi Police chief B.S. Bassi, who will retire on Monday.
“The cases of Rohith Vemula of HCU and Kanhaiya Kumar of JNU have been politicised by the NDA government to only divert attention of people from their own failures in keeping the promises made during the elections.
“And, people governed by RSS, who never contributed to our freedom struggle are now branding students as anti-national. We will oppose such attempts with greater force now,” MP and president of Democratic Youth Federation of India M.B. Rajesh told reporters at the Press Club in New Delhi.
The Palakkad MP from CPI(M) was joined by representatives from other youth bodies such as the All India Youth Federation (youth wing of the CPI), All India Youth League (youth wing of Forward Bloc) and the youth wings of the JD(U) and the RJD.
“We had given a call to hold protest against the handling of these incidents by the Centre from February 27 (Chandrashekhar Azad death anniversary) to March 23 (Bhagat Singh death anniversary) and we will hold stirs in different capitals during this period.
“And from March 23-31, we will organise big human chains in different cities across the country,” Mr. Rajesh said.AIYF national general secretary Tirumalai Raman said the Left and other “democratic fronts” have galvanised together and “we stand in solidarity on both Vemula’s case and the JNU incident”.

“The government first branded students of FTII as anarchists when they protested against the appointment of Gajendra Chauhan as its chairman and then called Rohith as anti-national and now sedition charges against Kanhaiya and other JNU incidents. It is only to hide its own failures,” he alleged.
Mr. Rajesh claimed, “The Modi government had promised to generate two crore jobs in five years but, as it nears two years in office, several thousands have actually lost jobs.”
“The youth is becoming discontent with this government and the Centre wants to suppress their voice. But, we will stand by them,” he said.

“As JNUSU president Kanhaiya Kumar and others were arrested based on fabricated evidence and doctored videos, we demand action against Delhi Police Commissioner B.S. Bassi also and dropping of all sedition charges against Kanhiya and other JNU students,” Mr. Rajesh said.
“And, if they have any credible evidence then they must use that and take action,” he said.Mr. Rajesh also said that a national convention would be held in New Delhi in March as part of the protests in which youth leaders from Left and other fronts, besides authors and intellectuals, would be present.
The joint forum also reiterated their demand for removal of Union Ministers Smriti Irani and Bandaru Dattatreya from office in the HCU case.