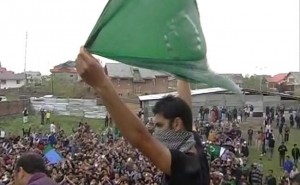 NEW DELHI: The waving of Pakistani flags by separatist leader Masarat Alam’s supporters at a rally in Srinagar is threatening to amplify the tension between the ruling allies People’s Democratic Party and the BJP.
In Jammu, junior partner BJP held protests against the state government. Party general secretary Ram Madhav, who had helped negotiate the alliance with the PDP, said, “We are not part of the government to give space to those shouting pro-Pakistan slogans there.”
Mr Madhav’s statement was the response to a contention by a section of the PDP that separatists need to be given political space.”Separatism and Pakistan constituency in Kashmir is a reality and we have to deal with it. We can’t deny democratic space to these people,” Wahid Rehman Parra, PDP’s youth president had said.

Chief Minister Mufti Mohammad Sayeed’s response has been cautious. “Democracy is a battle of ideas, they are free to have their own way, speak their mind. But something which is not acceptable, is not, will not be tolerated,” Mr Sayeed said.
The rally — organised by Mr Alam to welcome hardliner Hurriyat leader Syed Ali Shah Geelani to the Valley — was held on Wednesday. The flag waving raised a furore, with Union home minister Rajnath Singh after Home Minister Rajnath Singh asking for “immediate and stringent” action.
While the case filed by the police names no one, sources in the police told NDTV that a case can be made out against Mr Alam. “Video footage of the rally clearly shows Masarat is exhorting the youth waving Pakistani flags,” an officer said.
Mr Alam, 44, is accused of organising stone-throwing protests in the valley in 2010, in which more than 100 people were killed.His release, days after the PDP-BJP government was sworn in, caused a rift between the two alliance partners who had struggled to bridge an ideological divide.
Even Prime Minister Narendra Modi had said in Lok Sabha, “I also lend my voice to the outrage on the release of the separatist… this is not one party’s outrage, it is the nation’s outrage.”