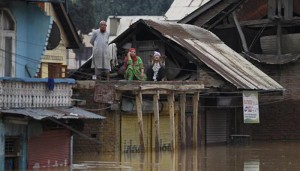 SRINAGAR: In some parts of Srinagar, for the fourth day in row, families continue to be stranded on the roofs of their houses, the water surrounding them nearly 10 feet high. Anger is seething, and four Air Force helicopters, carrying supplies, could not land this morning at the helipad at the Governor’s residence, after threats of stoning.
There has been no rain since yesterday, allowing new momentum to a massive rescue operation that has seen nearly 80,000 people brought to safety by tireless members of the armed forces and the National Disaster Response Force (NRDF). But the worst floods in over a century in the state mean that six lakh residents are still waiting for Related Kashmir Floods: Six Lakh Still Stranded, Some Phone Lines Restored in Srinagar Set Up To Combat Disasters, This Agency is Almost Defunct Today help in Srinagar and southern Kashmir; the river Jhelum, which flows through Srinagar, washed over the city on the weekend. In other parts of the state, five days of pounding rain ended on Monday evening.
By then, hundreds of villages were submerged with landslides rendering them inaccessible by road. In the Rambagh area of Srinagar on Monday evening, two rescue workers from the NRDF on a boat were reportedly attacked with sticks; their boat was punctured. One of the workers was injured.
Chief Minister Omar Abdullah last evening said, “I understand the anger but it is not true that nothing is happening… this situation is unprecedented.” The chief minister said that a lot of people seem to have underestimated the fury of the floods. “We asked people to move out of their homes and sent vehicles, but many did not do so believing that the water would subside,” Mr Abdullah said. 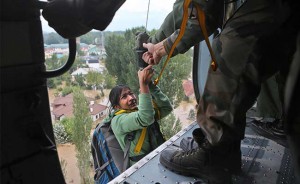 Mr Abdullah termed the situation in the state as ‘ very serious’ on Wednesday even as over 50,000 people have been rescued by the Indian Army in the worst floods that the state has seen in the last six decades.“The situation is very serious. The opposition should not play politics over it as it is not in my hands to start and stop rains. If they have a solution to the problem then they can inform me,” Omar said.He further said that relief and rescue operations are being continuously carried out by the Indian Army, NDRF, police and civil administration.
Army Chief Gen Dalbir Singh will visit Srinagar to review the situation and monitor the relief and rescue operation being done by the armed forces.Angry locals today heckled NDRF personnel in Srinagar during rescue operation. One of the personnel was seriously injured in the hand during the incident.Over one lakh Army personnel are carrying out the relief and rescue operations in the state where over 200 people have lost their lives in the calamity.
As the water level in the state’s capital receded today, the Army is now focussing on restoring Internet, electricity, phone and road connectivity to Srinagar.
Telecommunication lines were also restored in several parts of the city.Air India is ferrying tourists stranded in the state to safer places including Delhi and Chandigarh, As per news reports.Congress leader and former union minister Saifuddin Soz was reportedly heckled by the flood victims when he visited a relief shelter in Srinagar yesterday.The Army had restored Srinagar-Leh highway, which connects Kashmir valley with Ladakh, making it easier to supply relief materials to the people stuck in the state.It is working towards restoring the remaining damaged highways in the state in the next few days.