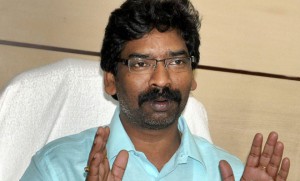 RANCHI: Its official now. The 475-days-old grand alliance between the Jharkhand Mukti Morcha and the Congress in Jharkhand has finally broken off with both the party leaders announcing to contest the forthcoming assembly elections on all 81 seats separately. The five phase assembly poll in Jharkhand is scheduled to begin on November 25.
“Yes, alliance between our parties has finally been broken off as at the last minute the Congress party ditched us. We’ll now contest on all the 81 seats”, declared Chief Minister and JMM leader Hemant Soren.
Leaders of both the parties, including Mr. Soren have been camping in Delhi to negotiate the alliance over seat adjustment and several rounds of talk between the two parties were held to reach a final agreement.However, party sources said that JMM was not ready to leave Jamtara, Ghatsila and Pakur seats to Congress while the Congress party had sough 45 seats and asked JMM to accommodate the other two regional alliance partners like JD-U and RJD from its quota of remaining 36 seats.
Significantly, ever since the assembly poll results had come from Maharashtra and Haryana a section of the state Congress leaders were in favour of going alone in Jharkhand elections while the other leaders favoured the alliance.“The poll results of Maharashtra and Haryana had indications that people have refused to vote for the regional parties”, said state Congress chief Sukhdeo Bhagat while adding that Congress in Jharkhand was in strong position to take on BJP on is own.
A delegation of sate leaders, led by Sukhdeo Bhagat had met with Congress president Sonia Gandhi earlier this week.Meanwhile, party insiders said that Congress party now is gearing up to forge new alliance with Babulal Marandi led Jharkhand Vikas Morcha along with JD-U and RJD in Jharkhand.Two JVM leaders have been sent to Delhi for alliance talk with Congress party, said Pravin Singh, a party leader.
However, like other regional parties Congress party too appears to be in a very fragile health in Jharkhand. In the last Lok Sabha poll the Congress Party had miserably failed to make its presence as its lone MP Subodh Kant Sahay too had lost the poll from Ranchi constituency. Besides, unlike other parties the Congress does not have a well-acclaimed leadership in the state.
In the 81 seats Jharkhand assembly the current strength is 70 after 10 legislators had recently resigned from their respective parties to join BJP or JMM. Before 2014 Lok Sabha poll two Independent candidates had joined Trinamool Congress and the party was accorded seats with treasury bench.Besides, the BJP has 17, JMM-15, Congress Party-12, RJD-5, JVM [P]-6, AJSU-6, RJD-5, JD-U-2, TMC-2, CPI-ML-2 and Independents-5 seats in the assembly.
In the fast changing political scenario of Jharkhand the BJP, though, has decided to go alone in the poll riding on the Narendra Modi wave but party sources also said that BJP may make some seat adjustment with Sudesh Mahto led AJSU, a regional party.“But, we’re in a strong position to contest the poll alone in Jharkhand today and form a stable government in the state after a long time”, said a state BJP leader.
In the last Lok Sabha poll BJP had won 12 out of total 14 seats bagging 40.1 per cent votes while the Congress had polled just 13.3 per cent votes with ruling party JMM 12.1 per cent.Ever since its creation as separate state in 2000 Jharkhand has seen altogether 9 chief ministers and three terms of President Rule.“It will be for the first time that the BJP will provide a stable and strong government in Jharkhand”, said state BJP leader Arjun Munda adding that the party would win over 55 seats in the upcoming state assembly elections.