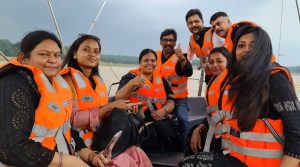 RANCHI: Following a meeting at the Chief Minister’s residence, Mr Soren and the MLAs were seen getting on buses with luggage and leaving. Later they arrived at Khunti, around 30 km from Ranchi, and were seen going for a boat ride in a lake near the Latratu dam.

Sources said they plan to return to Ranchi by night. Before their departure, Hemant Soren held a marathon third round of a meeting of legislators of the ruling alliance to chalk out a strategy to deal with the emerging scenario. There are 43 MLAs in the group that was moved, sources said.
Facing the threat of disqualification from the assembly, Jharkhand Chief Minister Hemant Soren and his ally Congress on Saturday rounded up their MLAs – the standard tactic of dodging attempts at poaching lawmakers and bringing down governments.
The move comes as an attempt to deflect poaching by the Opposition. Three Congress MLAs were recently arrested in West Bengal for allegedly planning to topple the government. Chief Minister Soren faces disqualification under the Representation of the People’s Act over a mining lease that he took on his own name despite holding the Mining and Environment portfolio. Since Friday, he has convened three marathon meetings to decide on the future course of action.
“The strategy is to wait for the governor to release EC’s order and we are prepared to deal with it. However, we still have to keep an eye on all MLAs. We are going to Latatu in Khunti to eat mutton and rice,” one of the MLAs on the bus said on the condition of anonymity.
Governor Ramesh Bais is likely to send the order of disqualification of Mr Soren as an MLA to the Election Commission of India (ECI) on Saturday, PTI reported, quoting sources in his office. The Election Commission had sent its opinion to Governor Bais on Thursday on a plea seeking that Mr Soren be disqualified as an MLA for violating electoral norms by extending a mining lease to himself. The BJP, the petitioner in the case, had sought 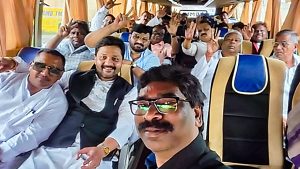 “Since our opponents are unable to match us politically, they are misusing constitutional institutions. But we are not worried… It’s the people who gave us the chair… Do what you can; my work for my people can never stop,” Mr Soren tweeted on Friday.
While Mr Soren is not barred from contesting elections, the BJP has called for fresh polls and asked the Chief Minister to resign “on moral grounds”
Meanwhile, BJP MP Nishikant Dubey tweeted today: “According to Jharkhand Mukti Morcha (JMM) sources, some MLAs reached Chhattisgarh at 2 am. Most of the MLAs are reluctant to go and are waiting for the orders of senior JMM leader Basant Soren. Some buses are parked in Ranchi for MLAs.”
The ruling coalition has 49 MLAs in the 81-member Assembly. The JMM, the largest party, has 30 MLAs, the Congress 18 legislators, and Tejashwi Yadav’s Rashtriya Janata Dal (RJD) one. The main opposition BJP has 26 MLAs. Minister Mithilesh Thakur had claimed that the ruling coalition has “50 MLAs (including the Speaker, which can go up to 56” while asserting that they had learnt “resort politics” from the BJP.
(With Media Reports)