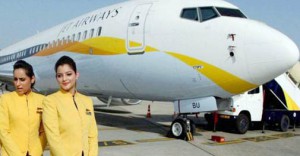 NEW DELHI : Jet Airways is to scrap its low-cost brand to concentrate on its full-service operation, the airline said on Monday, as it looks to cut costs after reporting its sixth straight quarter of losses.India`s No.2 airline by market share, which has not reported an annual profit since 2007, is betting on cost cuts and the launch of more international routes to return it to profitability by 2017.
“We as an airline confused customers (with multiple brands) … The main aim in the tie-up will be to increase market share,” Jet Chairman Naresh Goyal said at a press event after the release of the company`s first-quarter results.Jet`s low-cost carrier JetLite, which operates 11 aircraft, will now bear the main airline`s branding, Goyal said, without elaborating on whether the changes would result in job losses or alterations to the size of the fleet.
The company`s aircraft will now be split between economy and business class seats but the airline`s pricing will remain competitive despite the scrapping of the low-cost carrier, said James Hogan, chief executive of Etihad Airways, which owns a 24 percent stake in Jet.Despite fast-growing demand for air travel, all but one of India`s largest airlines are losing money as they grapple with high costs, low fares and fierce competition in their domestic market.
Jet said on Monday that it lost 2.18 billion rupees (USD35.6 million) during the three months to June 30, less than the 3.55 billion rupee loss it reported a year earlier after its revenues rose and financing costs fell.Shares in Jet, which have fallen about 15 percent this year, closed up 0.9 percent on Monday, in line with the benchmark index .BSESN.