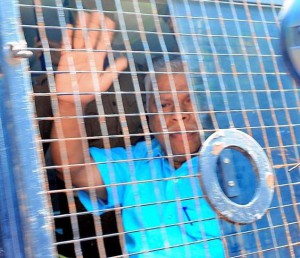 THIRUVANATHPURAM: Communist Party of India (Marxist) [CPI (M)] leader M.V. Jayarajan was incarcerated at the Central Prison here on Monday. The politician, whose conviction in a case of judicial contempt was upheld by the Supreme Court last week, was brought in a police vehicle to the 175-year-old colonial era prison from Kochi around 5.30 p.m.
Earlier, he had surrendered at the office of the High Court Registrar in Kochi.Scores of CPI(M) workers assembled outside the prison to express solidarity with Mr. Jayarajan. Many held placards with his photograph affixed on it. Loud sloganeering greeted the vehicle carrying Mr. Jayarajan when it entered the sprawling prison premises. Mr. Jayarajan has to serve 17 days of simple imprisonment.
Committal warrant
Special Correspondent writes from Kochi: High Court Registrar Johny K .Paul, on Monday issued a committal warrant to the police when Mr. Jayarajan appeared at the office and said that he would like to surrender to serve the sentence.
In November 2011, a Division Bench of the High Court had found him guilty of contempt charges for making certain remarks about a High Court judge who had banned roadside public meetings. The Supreme Court had reduced the six-month simple imprisonment awarded by the High Court to four-week imprisonment on his appeal.