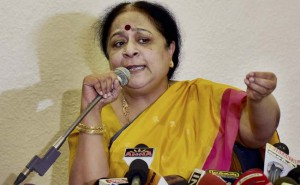 CHENNAI: Jayanthi Natarajan, former Environment Minister, has quit the Congress with a scathing attack on vice-president Rahul Gandhi, alleging that after instructing her to protect the environment, he publicly criticised her decisions before the election last year in an attempt to woo industry.
“The main hard line on environment was given by Rahul Gandhi, he could have asked me to move faster if he had concerns,” Ms Natarajan said at a press conference in Chennai, where she said she cannot remain in a party that has “an atmosphere of lies and suffocation.” She listed in detail the contents of a letter she sent in November to Mr Gandhi’s mother, Congress chief Sonia Gandhi; she said the note failed to elicit any response.
Ms Natarajan said she received “specific requests” from Mr Gandhi’s office which she treated as directives – these, she said, were complaints made by NGOs against industrial projects which they said would cause great environmental damage. Two big projects on this list, she said, included Vedanta Resources’ plans to mine bauxite in Odisha from land held sacred by tribals, and some projects of the Adani Group in Odisha.
As a result, she said that through her tenure as Environment Minister, she faced the “anger and wrath” of others in the cabinet who blamed her stalling development by refusing green clearances for major projects. In December 2013, she said then Prime Minister Manmohan Singh, “looking grim” said she must resign, as sought by “Madam Gandhi.”

A day later, Mr Gandhi told a gathering of top industrialists in Delhi that green clearances would no longer be “a bottleneck” for them. Ms Natarajan said she was shocked by his comments, that appeared to hold her responsible for blocking development. Mr Gandhi’s office, she said, then ran what amounted to a defamation campaign to contradict the official line that she had been removed as minister to focus on helping the Congress prep for the national election.