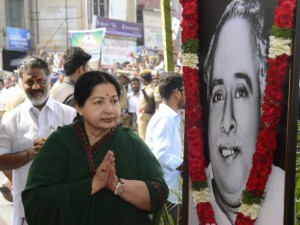 CHENNAI: Less than a fortnight since her acquittal in the disproportionate assets case, AIADMK Chief Jayalalithaa will be taking oath – again – as Chief Minister of Tamil Nadu. The swearing in ceremony will take place at 11.00 a.m. on Saturday at Madras University Centenary Auditorium, according to sources.
Ms. Jayalalithaa, who made her first public appearance in 217 days on Friday, to much adoration and frenzy among supporters, headed first to Raj Bhavan to meet Governor K Rosaiah. She presented to him a list of ministers who will be sworn in.
It may have been one of the hottest days that Chennai had seen this year, but that did not stop legions of AIADMK supporters from pouring out on to the street – beating drums, dancing in celebration, or just dutifully lined up for hours – to catch a glimpse of her.
Her convoy finally emerged only at around 1:30 pm after the inauspicious rahu kalam had passed. The hysteria spread to common citizens, who ran along with the convoy, strewing flowers on it and craning to glimpse at their “resurrected” Amma. Parts of the city were however caught in a gridlock, with commuters inching along to work as traffic was diverted.
Meanwhile, the Chepauk campus in the University has turned into a fortress with police personnel cordoning off the area to both media and the general public.An anonymous telephone call to Chennai Central threatening that ‘a bomb will explode at Jayalalithaa’s swearing-in ceremony’ created a flutter early Friday morning. Government Railway Police swung into action and searched the University of Madras, but fortunately, the call turned turned out to be a hoax
On May 11, Ms. Jayalalithaa was acquitted in the disproportionate assets case by the Karnataka High Court, less than a year after a special trial had sentenced her to four years in prison.