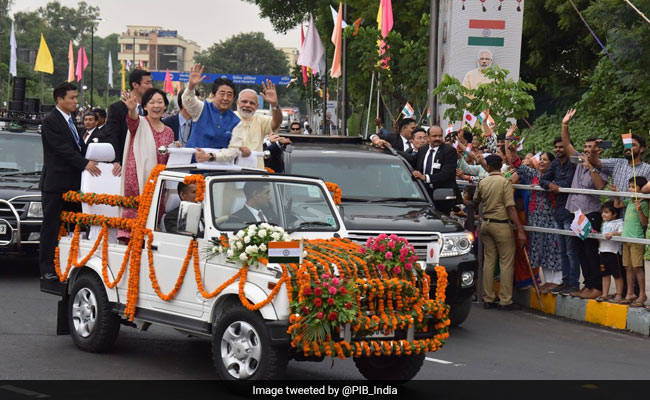 AHMADABAD/ NEW DELHI :  : Japanese Prime Minister Shinzo Abe changed into a Indian-style kurta-pyjama and Nehru jacket today before going on a roadshow with Prime Minister Narendra Modi after landing in Gujarat’s Ahmedabad for a two-day visit. Underscoring the importance of India-Japan ties, PM Modi went to the airport and received his Japanese counterpart with a warm hug.

Mr Abe, who is on his fourth visit to India, paid tribute at Mahatma Gandhi’s Sabarmati ashram and visited the 16th Century mosque ‘Sidi Saiyyid Ni Jaali’. The highlight of his visit will be tomorrow’s launch of India’s first bullet train project, which will run between Mumbai and Ahmedabad. The project is getting financial assistance from Japan.
plans to set up 11 industrial townships in India as part of plans to double its investments in the country and improve economic ties. As Japanese PM Shinzo Abe visits India, a 12th township may be in the offing. Dipanjan Roy Chaudhury finds out how Japanese expatriates working at a township near Delhi are adjusting to life in India Along the Delhi-Jaipur highway, a short drive from the town of Neemrana that’s famous for its picturesque, 15th century hill fort, lies the Japanese Indu ..

The two leaders had got into an open-top Gypsy decorated with flowers for the 9-km roadshow. Along the route, 28 huge stages were built on which schoolchildren held performances highlighting India’s varied culture. From Sabarmati Ashram, the leaders headed for ‘Sidi Saiyyid Ni Jaali’, a 16th Century yellow sandstone mosque in eastern Ahmedabad famous for its intricate latticework.

The day’s programmes concluded with dinner at Ahmedabad’s famous Agashiye terrace restaurant, where PM Modi hosted Mr and Mrs Abe. The restaurant, known for its splendid view and kosher Gujarati cuisine, has prepared a vegetarian thali menu which also includes sushi and PM Modi’s favourite dish “Handvo”.This morning, in a tweet, PM Modi thanked the Japanese Prime Minister, who in statement ahead of the visit said, “Prime Minister Modi is a strong leader with an outstanding ability to get things done”.
The highlight of PM Abe’s visit is tomorrow — a public function to mark the beginning of work on India’s first high-speed rail project, popularly called the bullet train. About 10,000 people are expected to attend.  “In November last year, I accompanied Prime Minister Narendra Modi on a visit to a Japanese Shinkansen rolling stock factory… It gives me great joy to know those Shinkansen trains will operate on Indian soil under the Mumbai Ahmedabad high speed rail project,” Mr Abe said in his message.

The 508-km rail project, which will cost an estimated Rs.1,10,000 crore, is expected to be completed by 2022-2023. A chunk of the expenditure will come from Rs. 88,000 crore Japanese loan on a minimal, 0.1 per cent interest, which India has 50 years to repay.
At the 12th annual summit, the two leaders will review the progress in the “multifaceted cooperation” and set the future direction for the special strategic partnership. This will be the fourth annual summit between PM Modi and Mr Abe, where they are expected to review the progress in the multifaceted cooperation between India and Japan under the framework of their Special Strategic and Global Partnership.
Japan is one of only two countries with which India has such an annual summit mechanism. The other nation is Russia.