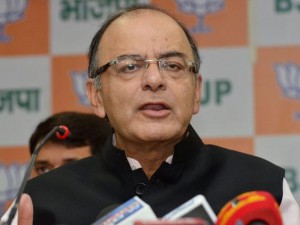 NEW DELHI:  Finance minister Arun Jaitley termed Congress’ support to students indulging in anti-national slogans as ideological hollowness.
Speaking at the concluding session of the two-day national Bharatiya Janata Yuva Morcha convention at Vrindavan in Uttar Pradesh, he defined the Leftist as the one who believe in dividing and ruling the country through violence.​
Taking a potshot at Leftists, he said that a small group out of them was “Jihadi” while the bigger group was “Maoist”.
Jaitely pointed out that Mahatama Gandhi, Jawahar Lal, Indira Gandhi or Rajeev Gandhi supported such elements.
AIR correspondent reports that referring to JNU student leader Kanhaiya Kumar’s speech at the university campus after being released from jail earlier last week, the minister said that it was a fight of ideologies in which the BJP has emerged victorious.​