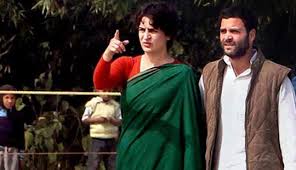 NEW DELHI : The knives are out in the Congress after Rahul Gandhi’s poor show in his first full-length TV interview, which not only disappointed the party rank and file but also gave a handle to detractors to deride the Gandhi family
The debacle of an interview is now being blamed on inappropriate briefing given to the Gandhi scion on crucial issues.
For starters, the Congress’ media department has washed its hands off the interview. It says it did not organise the one-on-one with the loudest mouth on television. Instead, it has put the blame on Rahul’s inner circle and public relations agencies Genesis Burson-Marsteller and IPAN (Hill and Knowlton) for the dismal performance.
The two public relations agencies were hired to bolster the public image of Rahul Gandhi, who besides being the Congress vice-president, also heads the party’s 2014 election campaign. What has angered Congressmen the most is what they call “inappropriate briefing” given to Rahul before he was sent to the “inquisition”.
Congress leaders told dna that Rahul could not take the TV anchor head on, on questions related to the 1984 anti-Sikh riots. Attributing this to inappropriate briefing before the interview, one of the leaders said: “He (Rahul) should have been briefed on 1984; told that 442 people who were involved in the anti-Sikh riots have been convicted by various courts over the years; that prime minister Manmohan Singh and Congress president Sonia Gandhi have apologised for the loss of lives.”
An influential section within the Congress feels that Rahul’s attempts to project himself as an outsider battling the establishment will have repercussions for the party, which has ruled the country for more than 50 years. They say the attempt to show Rahul as a man with a mission, fighting for the “real issues”, was defeated by his oft-repeated assertions on some issues while avoiding questions on crucial issues. The interview has given Rahul the dubious distinction of being a “dodger” unable to face real issues.
The interview was conducted on Saturday in Jawahar Bhawan, the seat of the Rajiv Gandhi Foundation. Union rural development minister Jairam Ramesh and Priyanka Gandhi Vadra watched the recording and also prompted Rahul from behind the camera, according to sources.
Congress managers on record, however, say they are happy at the wide publicity the interview has given to Rahul, who has now emerged as a man of determination with clear-cut ideas, not stepping aside from questions fired at him, no matter how tough.
But inputs received from various states over the past two days tell a different story. Ordinary workers and lower-rung leaders are disappointed and they believe Rahul should change and connect with the masses.
While agreeing with Rahul’s idea of changing the system, a senior leader said this can be done only after acquiring power. “You need the mandate to bring about a change. Rahul should have been toiling in Uttar Pradesh, Bihar, Madhya Pradesh like how Indira Gandhi used to do,” he said. The leader felt the only reason for the weakening of the Congress is that leaders have stopped going to the people.
A party general secretary said while Rahul explained that the Gujarat riots were fundamentally different from the anti-Sikh riots he should have used facts and figures to buttress his claim. Rahul should have trained his guns on BJP’s prime ministerial candidate Narendra Modi.
What Rahul missed to say in the interview has now been left to party spokespersons to carry forward. Ever since the interview, Abhishek Singhvi and RS Surjewala have been at pains to explain that Sonia Gandhi and Manmohan Singh have apologised for the 1984 anti-Sikh riots, and that the Supreme Court had to transfer trials in the 2002 Gujarat riots out of Gujarat en masse.
Singhvi said even Rahul’s worst critics would have to concede that he has shown honesty of purpose, commitment, passion and humility, and that he had just begun his journey.
Rahul inner circle in the line of fire
Congress’ media department has washed its hands off the interview. It says it did not organise the one-on-one… Instead, it has put the blame on Rahul’s inner circle and public relations agencies for the dismal performance.