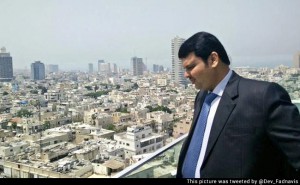 PANJI: Maharashtra Chief Minister Devendra Fadnavis today said that he has asked the police not to salute him every time he passes by them.
“I feel, today, Chief Minister do not require to be saluted every time he passes by traffic cops. I have told police force in Maharashtra to do away with this system as I am not in favour of all this,” Mr Fadnavis said at the ongoing ‘Women Economic Forum’ in Panaji.
The Chief Minister also said he has decided to cut down the number of convoy cars from five to two except while travelling in sensitive areas.
“I don’t believe in VVIP culture. This was a culture created during the British rule and at some point of time even after independence the VVIP and security culture was needed,” he said.
“But today we don’t need that culture as India is a free country. British introduced the concept of VVIP, wherein the police force has to salute them every time they pass by.
The concept was introduced as British wanted to prove themselves superior, they wanted to rule the country,” the Chief Minister said.
“But now India is a free country. I believe that it is pointless to have unwanted security or using excess number of convoys to Chief Minister and council of Ministers. This is wastage of manpower,” Mr Fadnavis added.
“No doubt you require additional security when you travel in some sensitive areas or when it is protocol but not always. It is different case when we speak about the Prime Minister or
Union ministers, they do need security,” the chief minister said.Speaking on how he reduced the security around him, Mr Fadnavis said soon after taking over as chief minister, he asked the police department to carry out audit of his security.
“They (police) offered me ‘Z plus’ security with total fifteen convoys. I was against this but took it as they said Chief Minister of Maharashtra has threat from naxals,” he added.”But I cut down the convoys from fifteen to five and now further want to reduce to two,” he said.
“I am of the view that we may be the chief minister but we too are citizens and have to follow all rules and hence my convoy stops at every signal just like normal citizen,” Mr Fadnavis said.He said he feels the politicians need to change the mindset and have to do away with the VIP culture.
“I have seen some security personnel of politicians carrying their briefcases, this is not the concept of having security. The mindset needs to be changed,” he added.