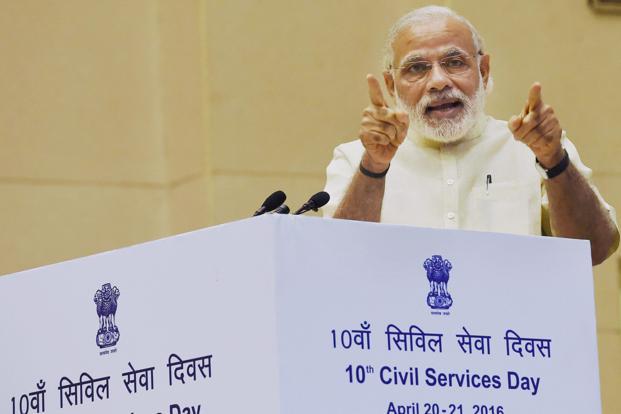 NEW DELHI : Prime Minister Narendra Modi today urged bureaucrats to change their mindset and style of working and “make excellence a habit”. He also stressed on political will to push reforms and said – “I do not lack it, I probably have extra.”

Addressing the country’s top officials in Delhi, PM Modi said: “With changing times, a need may arise that we may have to change our working style. From regulator, we need to be an enabling entity.”

“We will neither be able to see any change, nor any change would come in the country. But if we see things from ‘CAG+1’ then there would be changes,” the Prime Minister said, referring to outcome- and output- based decision-making in the government. He asked the bureaucrats to have out-of-the-box thinking to bring solutions to problems faced by people.
“It will be good if you change your working style and way of your thinking. If you come out of the role of being regulator and act as enabling entity, then challenges would convert into opportunities,” Modi said.The Prime Minister said that senior officers should refrain from “know-all” syndrome and give a serious thought to new ideas from their juniors.
He said hierarchy in the bureaucracy remains an issue which has been inherited from colonial rulers and “was not left behind in Mussoorie (where the civil service academy is located)”.

Talking about people’s perception towards bureaucracy, he said when bureaucrats are not bad and they are not out to work with some bad will, then what is the reason that common man instead of having a “feeling” (bhaav), has “abhaav” (complaint)?

“What is the reason? We must introspect and if we do that, then I don’t feel we need big changes (in changing people’s perception),” Modi said.He said people clap when army saves lives during flood in Kashmir. “The same people may later pelt stones at them but for a moment this deed (of army men) touch them,” the PM said.

“Earlier, the role of the government, from healthcare to wanting to set up an industry, was very strong. Things have been changing for the past 15 years,” he said, commenting that the days when people depended on the government for all their needs were over.

This, he added, was the time for out-of-the-box thinking and confident decisions. “Your word is of great value. Your signatures can change things. Can we change?”
In a strong dig at red tape, the PM said, “During my PRAGATI sessions (the platform where he reviews government work by interacting with officials) I have found files and projects stuck for years are cleared in 24 hours. I learn from this. If this can happen then it has to become a lesson for all.”
Questioning bureaucratic delays and tangles, he wondered: “Why are government departments fighting in courts against each other? Why is there one government, two stands? Is it ego? Let is all think. This is clogging the judicial system and causing delays and waste.”

Attacking an old bureaucratic habit of dressing statistics to present achievements, he said, “Does jugglery of statistics achieve anything? The culture needed is outcome-centric vision for governance.”

While making his point, he also shared why he had banned mobile phone in his meetings. “These days… I see district officials so busy, so busy, so busy,” he said, mimicking furious tapping on a phone keypad.
Officials should take decisions that are in national interest, said the Prime Minister, urging his audience to take “collective ownership” to bring change. “Don’t make decisions which are temporary or offer a temporary fix for your particular area…It is important to make ourselves relevant in changing times or else, we will become irrelevant.”
The PM gave away awards for excellence based on the execution of the government’s priority programmes. Winding up his speech, he appealed to bureaucrats: “Think of the dreams you had when you were on your way to the IAS academy and your parents came to see you off.”