RECKONG PEO/SHIMLA: The first voter of independent India, 97-year-old Shyam Saran Negi, kept his date with the ballot once again when he exercised his franchise at Kalpa polling station, located 10,500 feet above sea level in Kinnaur district of Himachal Pradesh.
The fragile old man who is EC’s poster boy voiced the apprehension that it may be the last time he votes, given his poor health. Kalpa is part of Mandi Lok Sabha seat. Negi, who will be 98 years old on July 1, was given a red carpet welcome when he reached the polling booth. District electoral officer-cum-Kinnaur deputy commissioner D D Sharma and Kalpa SDM Prashant Deshta handed him a bouquet as a Kinnauri band played in the background.
Undettered by difficulty in walking, Negi along with his wife Heeramni and other family members, reached Kalpa polling station early to cast his ballot. His frail health did not dampen his enthusiasm for the electoral process. 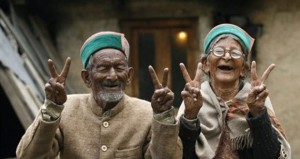 Realising the importance of seeing the country’s first voter vote, people from the entire village as well as media persons from different parts of country were there to witness the occasion. A festive atmosphere pervaded the polling booth, pepped up perhaps by the EC’s poster boy. The staff was attired in traditional Kinnauri dress while a traditional band belted out folk tunes outside. The Election Commission had made special arrangements at Kalpa polling station where Negi had scripted history on October 25, 1951, by becoming the first voter of Independent India.
When Negi exercised his franchise at around 7.20 am, he had created a record of voting in all elections — assembly, parliament or panchayats. “To form a strong and stable government people should vote in large number,” said Negi who is also the brand ambassador of Election Commission. ”He prefers to walk to a polling booth than to travel in a vehicle. His child-like enthusiasm about being part of the electoral process has not waned despite his poor health and he thrives in discussing politics, ” said Negi’s daughter-in-law Surma Devi, the pradhan of Kalpa panchayat.
In the first general election in the country, tough geographical conditions of snowbound Kinnaur had forced the Union government to hold early elections on 25 October, 1951. Elections were held in other parts of the country in January-February,1952.The election material was transported to Chini village polling station located in a primary school on mules. At that time Mandi parliamentary constituency was known as Mandi-Mahasu parliamentary constituency. Negi, a government school teacher, was the first to cast his vote at Chini village (now known as Kalpa) making him the first voter of Independent India.

The Indian government’s decision to ban the BBC documentary on the December 16, 2012 gang rape in Delhi, India’s Daughter,...

MUMBAI : Kangana Ranaut came with almost zero chances of making it in Bollywood. Hailing from Himachal Pradesh, this actor...

NEW DELHI : Central Bureau of Investigation director Ranjit Sinha has stoked a controversy with his comment that the UPA...