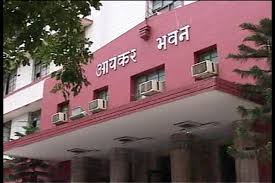 NEW DELHI : After being embroiled in corruption-related controversies, the Arvind Kejriwal-led Aam Aadmi Party (AAP) seems to have landed in further troubles as the Income Tax (IT) department on Tuesday initiated legal prosecution proceedings against the party and eventually asked the Election Commission official to cancel AAP’s membership.
A CNN-News18 report, the IT department officials issued a showcause notice to the party and asked “why should we not initiate proceedings against you”. “In view of the above, you are hereby required to showcause as to why prosecution proceedings under Sec 277(A) and 276(C) of Income Tax should not be initiated against you for falsification of books and a willful attempt by you to evade tax,” a copy of prosecution notice read.
The department also asked the Election Commission to cancel the party’s membership for allegedly lying about donations made to the party, the report said. AAP has to reply to the prosecution showcause notice by 16th May.
Tax officials say they the party, which is headed by Arvind Kejriwal, has been unable to explain the source of 2 crores of donations received by it ahead of the 2015 election. Last week, the party was asked by the Home Affairs Ministry to explain details of the funds it has received from overseas supporters.

On the other hand, Chief Minister Kejriwal said the accusations of illicit funding are part of the Centre’s attempt to discredit AAP and its stated commitment to fighting graft as the main reason for its existence.Meanwhile, sacked Delhi Water Minister Kapil Mishra today submitted three set of complaints against Kejriwal and other party leaders to the Central Bureau of Investigation (CBI).

“I’ve registered three complaints. The first in connection with Rs 50 crore land deal of Arvind Kejriwal’s relative. The second against the cash exchange of Rs 2 crore between Kejriwal and Satyendra Jain, and third against five AAP leaders who misused funds for foreign trips,” he said after meeting CBI officials.

Mishra also demanded AAP leaders to put out the details of their foreign tours in public domain, while threatening to sit on a hunger strike if they refuse to do so.Responding to MIshra, Delhi CM Arvind Kejriwal promised to expose a “larger conspiracy” on the issue raging in the country.

“AAP leader Saurabh Bharadwaj will make the revelation in the Delhi assembly today,” Kejriwal said in a tweet today. Earlier in the day, Mishra had challenged the Kejriwal to contest election against him.”You are trying to remove me from the assembly, I challenge you to contest the elections against me, from any seat. Let’s fight the election from my Karawal Nagar seat or even your New Delhi seat. If you believe that people are with you, then I am ready to resign,” Mishra said while reading out a letter addressed to Kejriwal.