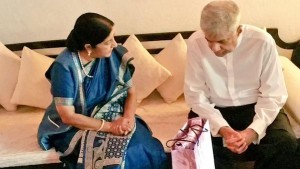 NEW DELHI: External Affairs Minister Sushma Swaraj on Monday met Sri Lankan Prime Minister Ranil Wickramasinghe in Colombo and discussed the issue of Lankan Navy’s actions against Indian fishermen.
The External Affairs Minister told Wickramasinghe that the issue of fishermen was a humanitarian one, which was different from the case of Italian marines.
Swaraj is in Colombo ahead of Prime Minister Narendra Modi’s Lanka visit to finalise the details of his tour. Informing this, Spokesperson of Ministry of External Affairs, Syed Akbaruddin said, “The External Affairs Minister (EAM) discussed areas that PM’s visit will cover,” and added, “The EAM raised issue of Indian fishermen and how it is a humanitarian issue.”
Spelling out the details of the dialogue between the leaders of the two nations, Akbaruddin said, “As a first step it has been agreed that after PM Modi’s visit Fishermen Association of both nations (India-SL) will meet to take the matter forward.”
The External Affairs spokesperson said that the focus was on finding an interim solution while the countries work to find long term solution. “Both EAM and PM Wickramasinghe are satisfied that this (fishermen) issue is to be addressed in a humanitarian manner and through dialogue,” he added.
The controversy was stoked by Wickramasinghe’s statement that suggested that Indian fishermen would be shot if they intruded into the island nation’s waters.
Alleging that Indian fishermen were taking away the livelihood of Northern Lanka fishermen, he told Tamil Thanthi TV that, “If someone tries to break into my house, I can shoot. If he gets killed…Law allows me to do that.”
Talking about the fishermen issue, he said, “As far as I’m concerned, I have very very strong lines. This is our waters…Fishermen of Jaffna should be allowed to fish. We stopped them from fishing , that’s why the Indian fishermen came in, they are willing to have a deal…Let’s have a reasonable deal. But not at the expense of the income of the Northern Fishermen…No.”
Wickramasinghe also raised the issue of Italian sailors being arrested, saying that if India is friendly with Italy, it should show the “same magnanimity to Italy that you want us to show.”
There have been several cases of arrest and abduction of Indian fishermen in the last month.Sri Lankan fishermen have been complaining that since the advent of new government, the number of Indian fishermen breaching the country’s waters for illegal fishing have been increasing.
As many as 86 Indian fishermen were arrested and their 10 fishing boats seized by the Sri Lanka Navy for allegedly poaching in the country’s waters last month.