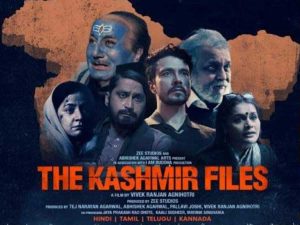 NEW DELHI : On the closing day of the 53rd International Film Festival of India, “The Kashmir Files” grabbed news after the jury labeled it as “propaganda.” The festival’s jury chair, Israeli filmmaker Nadav Lapid, criticised the Vivek Agnihotri movie at the closing ceremony.Lapid’s comments on the movie, one of the most talked about films of the year, sparked a controversy on social media with reactions pouring from various quarters.
The Israel ambassador to India Naor Gilon launched a scathing attack on his fellow countryman and filmmaker Nadav Lapid for calling ‘The Kashmir Files’ “propaganda” and “vulgar” at the 53rd International Film Festival of India (IFFI).
“An open letter to #NadavLapid following his criticism of #KashmirFiles. It’s not in Hebrew because I wanted our Indian brothers and sisters to be able to understand. It is also relatively long so I’ll give you the bottom line first. YOU SHOULD BE ASHAMED. Here’s why,”Naor Gilon tweeted.
“I unequivocally condemn such statements. There is no justification. It does show the sensitivity of the Kashmir issue here,” said the envoy. ” The Kashmir Files is supposed to be a movie on the plight of Kashmiri Pandits who lost their lives due to targeted killings in 1990. Directed by Vivek Agnihotri, who is known for holding right-wing views, the movie is based on video interviews of first generation Kashmiri Pandit victims. ‘The Kashmir Files’ was released earlier this year in theatres and it told the story of the Hindu exodus in the 1990s and targeted killings of the Kashmiri Pandits. The movie went on to become one of the highest-grossing Bollywood movies of 2022 and Anupam Kher received acclaim for his performance.
In a series of tweets, the Israeli envoy said he was extremely hurt to see this. “In Indian culture they say that a guest is like God. You have abused in the worst way the Indian invitation to chair the panel of judges at @IFFIGoa as well as the trust, respect and warm hospitality they have bestowed on you,” he tweeted.”The friendship between the people and the states of India and Israel is very strong and will survive the damage you have inflicted. As a human being I feel ashamed and want to apologize to our hosts for the bad manner in which we repaid them for their generosity and friendship,” said Gilon. India-Israel ties are very strong and will survive the “damages” inflicted by his remarks, Gilon said in his tweets addressed to Lapid.” 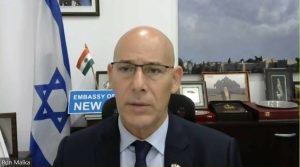 “My suggestion. As you vocally did in the past, feel free to use the liberty to sound your criticism of what you dislike in Israel but no need to reflect your frustration on other countries. I’m not sure that you have enough factual basis to make such comparisons. I know I don’t,” he added.
On Monday, IFFI Jury Head Nadav Lapid, at the closing ceremony of the film festival, called the film ‘Kashmir Files’ “propaganda, vulgar”. His remarks which have since gone viral have invited widespread criticism.Talking about the controversy, a video from the festival went viral on social media in which Nadav was seen making controversial remarks about the film.
“I would like to thank the head of the festival and the director of the programming for the cinematic richness of the programme, for its diversity, for its complexity. It was intense. We saw seven films in the debutant competition, and 15 films in the international competition, the front window of the festival. 14 out of them had cinematic qualities, defaults and evoked vivid discussions,” he said in his speech.
“All of us were disturbed and shocked by the 15th film, The Kashmir Files. That felt like a propaganda, vulgar movie, inappropriate for an artistic competitive section of such a prestigious film festival. I feel totally comfortable openly sharing these feelings here with you at this stage. In the spirit of this festival, we can surely also accept a critical discussion, which is essential for art and life,” he further said.
The film was called out for its problematic politics by a section of critics and authors, but it performed exceptionally well at the box office by minting over ₹ 330 crore.The movie had also sparked a debate among political parties after several BJP-ruled states, including Madhya Pradesh, Uttar Pradesh and Gujarat, gave it exemption from entertainment tax. Also starring Darshan Kumar, Mithun Chakraborty and Pallavi Joshi, the film was showcased as part of the Indian Panorama Section at the IFFI.
(Bureau Report with Media Inputs ).