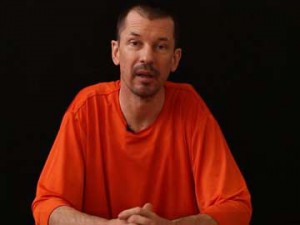 BEIRUT:  Islamic State militants fighting in Iraq and Syria released a video on Thursday that they said shows British journalist John Cantlie in captivity saying he will soon reveal “facts” about the group to counter its portrayal in Western media.
The Islamic State, which controls territory in Syria and Iraq, has already beheaded two American journalists and one British aid worker in recent weeks in what it said was reprisal for U.S. air strikes against it in Iraq.But in the new roughly three-minute video posted on social media sites, the man identified as Cantlie appears in good health and promises to “convey some facts” in a series of “programmes,” suggesting there would be further instalments.
“Now, I know what you’re thinking. You’re thinking, ‘He’s only doing this because he’s a prisoner. He’s got a gun at his head and he’s being forced to do this.’ Right?” the man in the video, wearing an orange shirt and closely-cropped hair, says.”Well, it’s true. I am a prisoner. That I cannot deny. But seeing as I’ve been abandoned by my government and my fate now lies in the hands of the Islamic State, I have nothing to lose.”
U.S. President Barack Obama has been trying to build an international coalition to destroy Islamic State, a Sunni Muslim extremist group which has exploited the chaos of Syria and Iraq to seize swathes of territory in both countries.The United States has already carried out scores of air strikes against the group in Iraq and Obama said in a policy speech he would not hesitate to strike it in Syria as well.
In the new video, titled “Lend Me Your Ears, Messages from the British Detainee John Cantlie,” the man identified as Cantlie says he was captured by the Islamic State after arriving in Syria in November 2012.He says he worked for newspapers and magazines in Britain including the Sunday Times, the Sun and the Sunday Telegraph.”After two disastrous and hugely unpopular wars in Afghanistan and Iraq, why is it that our governments appear so keen to get involved in yet another unwinnable conflict?” the man says in the video.
“I’m going to show you the truth behind the systems and motivation of the Islamic State, and how the Western media, the very organisation I used to work for, can twist and manipulate that truth for the public back home.”Cantlie said other Western governments have negotiated for the release of their hostages but that the British and U.S. governments chose to do things differently.
“I’ll show you the truth behind what happened when many European citizens were imprisoned and later released by the Islamic State, and how the British and American governments thought they could do it differently to every other European country,” the man in the video says.”They negotiated with the Islamic State and got their people home while the British and Americans were left behind,” he says.
PREVIOUS CAPTURE
The United States resumed air strikes in Iraq in August for the first time since the withdrawal of the final U.S. troops from the country in 2011.The raids followed major gains by Islamic State fighters who have seized a third of both Iraq and Syria, declared war on the West and seek to establish a caliphate in the heart of the Middle East.
The U.S. House of Representatives approved on Wednesday Obama’s plan to train and arm moderate Syrian rebels in a message of support for his military campaign to “degrade and destroy” Islamic StateBritain has delivered humanitarian aid, carried out surveillance, given weapons to Kurds and promised training in Iraq. On military action, Britain supports U.S. air strikes and British Prime Minister David Cameron has repeatedly said Britain itself has ruled nothing out except combat troops on the ground.
Cantlie had previously been taken hostage in July, 2012 along with Dutch photographer Jeroen Oerlemans while working near the Syrian border with Turkey. They were released the same month after a group of “Free Syrian Army” fighters freed them.Cantlie told media after his release they were threatened with death unless they converted to Islam, and both were shot and slightly wounded when they attempted to escape. He was shot in the arm, Oerlemans in the leg.
At the time, Cantlie wrote in the Sunday Times that the group of about 30 militants had been made up of different nationalities, many British and none Syrian, and that the British jihadists had treated him the most cruelly in captivity.
On Saturday, Islamic State released a video showing the beheading of British aid worker David Haines. A black-clad man in the video said another hostage, identified as Alan Henning, would be killed if Cameron continued to support the fight against Islamic State.Thursday’s video made no mention of Henning.
“Maybe I will live and maybe I will die,” the man identified as Cantlie says. “But I want to take this opportunity to convey some facts that you can verify. Facts that, if you contemplate, might help preserving lives.”