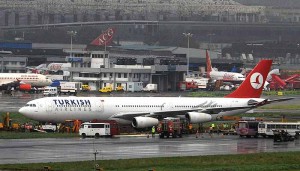 MUMBAI: Security agencies here have gone into high alert mode after two notes found at the Mumbai airport on Thursday evening warned of a terror attack on Republic Day.As per reports, the two notes with ISIS names on them teasingly ask: “26/01/2015 IS BOM OK?”
The notes were found in two toilets, meant for males, by a cleaner The toilets are located inside the Terminal A1 of Mumbai’s domestic airport.
The development came just over a week after a hand-written note scribbled on a wall inside the Mumbai airport threatened of an impending attack by the ISIS, or the Islamic State, on January 10.
The note, found inside a toilet in the Level 2 of Terminal 2 of the Chhatrapati Shivaji International Airport, read “ATTECK BY ISIS DATE 10/01/15 (sic)”.
The note appeared to have been scribbled on the wall using a pen.The Mumbai Police has been – in view of the Republic Day on January 26 – maintaining heightened level of vigil.
Security agencies have reasons to be worried as four Indian youth, who had joined the Islamic State, were from Thane near Mumbai, pointing to the possibility of a network of ISIS sympathisers being active in the city.