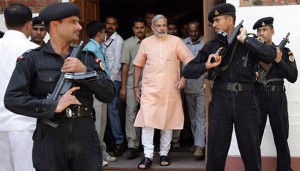 NEW DELHI: The intelligence agencies have warned that dreaded terrorist outfit Islamic State may target Prime Minister Narendra Modi on Republic Day by using its squad of young suicide bombers.
The intelligence agencies have issued an alert that children aged from 12-15, specialized in the use of weapons and explosives, might have sneaked into the country from cross-border
NCR police and intelligence units have stepped up vigilance after inputs of possible terror attack in the country, as per reports.