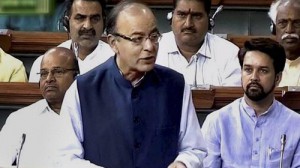 NEW DELHI: Amid new claims in Ishrat Jahan episode, Finance Minister Arun Jaitley on Tuesday accused Congress of “colluding” with the accused and “unbaring” national security apparatus in the case to “fix” Narendra Modi.
He raked up the issue in Rajya Sabha while intervening in a debate on Motion of Thanks to the President’s Address while he was responding to attack over the government over issues like “intolerance”.
He said the controversy related to the Ishrat episode was not simply a case of changing the affidavit but the UPA government had changed the composition of SIT on a couple of occasions.

“You (Congress-led UPA) colluded with the accused….You allowed them bail… and in the process, you unbared the entire security apparatus of India. All this was done because you wanted to fix a political leader… That was not intolerance, that was the law,” he said, addressing the Congress benches with apparent reference to Modi, who was then the Chief Minister of Gujarat.
Jaitley said in 2013, he had written an article saying, “Governments are not immortal, they change and I hope once this government changes, some day an inquiry will be held on how this compromise with national security was taking place.
At that time, you thought no one can remove your government.”His attack on Congress came in the midst of new claims, including by former Home Secretary G K Pillai, that the affidavit in the case had been changed at “political level” to drop mention of Ishrat’s alleged links to terrorism.
Hitting out at critics, Jaitley said, “you talk about intolerance. During Delhi polls, news about attacks on religious places of a particular community were played up and an image was created the world over that it was political atrocity.
“Was it a political conspiracy? When police investigated, they were found to be cases of theft or simple vandalism under the effect of liquor. But you used it during Delhi elections.
“In West Bengal, a nun was assaulted and a Bangladeshi was arrested for it. This happened in a state (not ruled by BJP), but you gave it a political colour.
“Today the debate on intolerance is who will be the chairman of an institution. I have read history and remember that when a singer did not sing in a Youth Congress programme, he was debarred from AIR,” he said.
Underlining that unity of the country is “paramount”, the senior minister referred to the JNU incident and said, “if we have to keep this country together, then obviously we have to make sure that the space for those who speak in the break up of this country, itself, that space if not narrowed down, it should be completely eliminated.