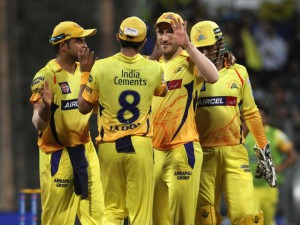 NEW DELHI: The promoters of Chennai Super Kings or CSK and Rajasthan Royals have been suspended for two years from the Indian Premier League by a Supreme Court-appointed panel headed by former Chief Justice of India Rajendra Mal Lodha, that inquired into the huge betting scandal that has rocked Indian cricket.
The panel has also suspended Gurunath Meiyappan of CSK and Raj Kundra, who owns the Rajasthan Royals, for life from all cricketing activities. CSK is promoted by India Cements, a company owned by former cricket board chairman N Srinivasan, who is also the father-in law of Gurunath Maiyappan.
The panel said both Mr Meiyappan and Raj Kundra, who is the husband of actor Shilpa Shetty, had violated the anti-corruption code by betting regularly. “The purity of the game has been affected by the actions of India Cements and CSK. Fans have been cheated,” said Justice Lodha.
He also said, “Kundra placed bets through a known punter and he introduced him to a bookie. He brought disrepute to BCCI and IPL and acted contrary to the spirit of the game.” Rajasthan Royals is promoted by Jaipur IPL in which Raj Kundra and Shipla Shetty are partners.
Justice Lodha said today that it is for the Board of Control for Cricket in India or BCCI to take a call whether Chennai Super Kings or Rajasthan Royals will be bought by another franchise. CSK and Rajasthan Royals and also Mr Meiyappan and Mr Kundra, can appeal against today’s verdict to a two-member Supreme Court bench of Justice TS Thakur and FMI Kalifulla.The IPL scandal erupted in May, 2013, when the Delhi Police arrested Rajasthan Royals players S. Sreesanth, Ankit Chavan and Ajit Chandila and charged them with spot-fixing matches in return for money. Actor Vindoo Dara Singh was also arrested and he alleged the involvement of Gurunath Meiyappan, who was arrested later on charges of betting, cheating and conspiracy.
A commission appointed by then BCCI chief N Srinivasan gave Meiyappan and Raj Kundra a clean chit, saying there was no evidence of wrong doing against them. Srinivasan said CSK team official Meiyappan was a “mere cricket enthusiast.”The BCCI panel’s decision to let off Mr Meiyappan and Mr Kundra was challenged by Cricket Association of Bihar secretary Aditya Verma in the Bombay High Court. Srinivasan was charged with shielding his son-in-law and others. In July 2013, the Bombay High Court found the BCCI probe panel illegal and said the report was null and void.
In August 2013, the BCCI moved the Supreme Court challenging the Bombay High Court order. In October, the top court appointed the three-member Justice Mukul Mudgal committee to investigate, but not impose punishment. The BCCI was asked to cooperate in the probe.
The Mudgal panel submitted its report in February, 2014. It said Mr Meiyappan was the face of CSK and was involved in betting and sharing team information. It also said Mr Kundra participated in betting. In January this year, the court set up the Lodha committee to determine amount of punishment for them and their teams.