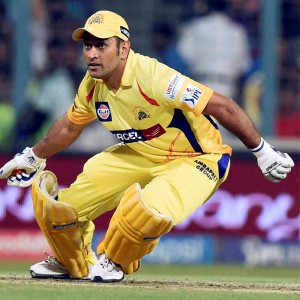 MUMBAI: India’s limited-overs skipper Mahendra Singh Dhoni, along with his teammates Ravindra Jadeja, Ajinkya Rahane, Suresh Raina and Ravichandran Ashwin, among others, will be up for grabs for the two new IPL teams in the draft to be held on Tuesday.

Sanjeev Goenka’s New Rising won the bid for the Pune franchise while Intex won the bid for Rajkot after a reverse bidding process held in Delhi on Decmber 8 to replace suspended teams Chennai Super Kings and Rajasthan Royals for the next two editions to be held in 2016 and 2017.
Also available for picking by the Twenty20 League’s two new franchises are other top international stars such as New Zealander Brendon McCullum, Australia’s Shane Watson, now retired from international cricket, and current captain Steven Smith, and West Indian all-rounder Dwayne Bravo from a total of 50 cricketers, who played for suspended IPL teams CSK and RR in the last edition earlier this year.
Pune will be given the choice to pick the players first because they were the lowest bidders (negative bids) to buy the new team for two years in the draft to be held at the Mumbai Cricket Association’s recereation centre at the Bandra Kurla Complex.

The bidding process for the two new franchises was necessitated by the suspension of Chennai Super Kings and Rajasthan Royals for the involvement of some of their officials and co-owners in the 2013 IPL spot-fixing scandal, which was probed by the Supreme Court-appointed Justice (retd) R M Lodha committee.

However, both the CSK and RR will be allowed back in the league after serving out their suspension.The cricketers from the two suspended franchises will be divided into two groups of capped and uncapped and the top names will be sold through the draft system. The two new teams will have a minimum of Rs 40 crore and a maximum of Rs 66 crore to buy players.