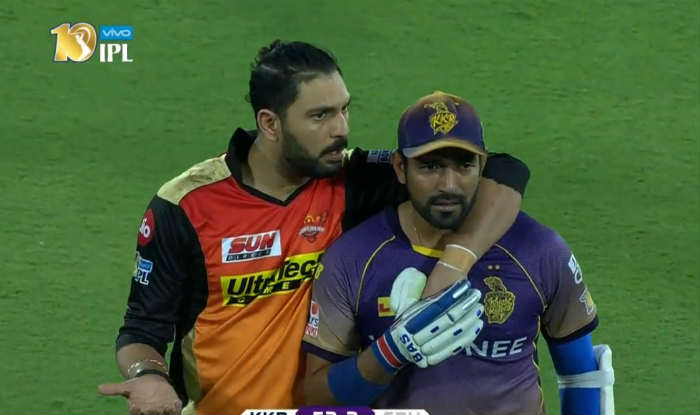 NEW DELHI : The return-leg of the Sunrisers Hyderabad-Kolkata Knight Riders fixture in the 2017 Indian Premier League (IPL) witnessed Robin Uthappa and Siddarth Kaul getting involved in ‘body contact’, and then an angry Yuvraj Singh taking over the matter.

But his knock started with a tussle with Hyderabad bowler Kaul. Uthappa played two dot balls, then hit a four to open his account off the last ball of the third over.In his bowling follow through, Kaul found himself reaching the middle of the pitch, even as Uthappa walked towards his partner Manish Pandey at the other end. On the way, they made body contact, followed by couple of word exchange.

With the umpire S Ravi’s intervention the matter seemed to have resolved. But after seventh over, when a passing rain shower stopped the play and the players were returning to their respective dug-outs, Yuvraj Singh approached Uthappa and made a good enough reason to wrap around the former.A seemingly angry Yuvi seemed to have shared some words of wisdom, or warning in that long talk.