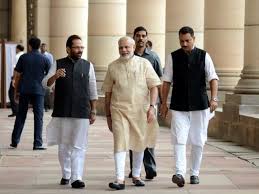 NEW DELHI: In the middle of a fiery debate in Parliament on perceived “intolerance” in the country, the ruling BJP today warned its lawmakers against speaking out of turn. Prime Minister Narendra Modi, who returned this morning after attending the Paris Climate Summit, is expected to reply to the debate. Congress leader Rahul Gandhi is likely to speak in the Lok Sabha.
At a meeting this morning attended by BJP chief Amit Shah, BJP lawmakers were “told not to make provocative statements as they divert attention from PM Modi’s development agenda,” said union minister Mukhtar Abbas Naqvi.
Sources say union minister Venkaiah Naidu asked lawmakers not to speak out of turn and make provocative statements as the opposition seized these to make an issue.
Yesterday, speaking in the Rajya Sabha, Mr Naidu conceded that there was “some intolerance in society” that needed to be identified and dealt with firmly. “Instead of that, we are making it generalized,” he said.
In the Lok Sabha, there were repeated adjournments after Left parliamentarian Mohd Salim accused the Home Minister of saying, after Narendra Modi and BJP’s election victory last year, that India had the first “Hindu ruler after 800 years.”
Rajnath Singh denied the quote attributed to him by the newsmagazine Outlook and demanded an apology. “I have never been hurt as much as I have been today in my entire Parliamentary career,” he said.
After repeated disruptions, the debate resumed when Speaker Sumitra Mahajan said Mr Salim’s remarks would be deleted from the records. The Outlook magazine later apologised saying the quote had been “erroneously attributed” to the Home Minister when in fact, it was said by Vishva Hindu Parishad leader Ashok Singhal, who died last month.
The Congress party’s KC Venugopal accused the government of “politics of communalism” and using Hinduism for political interests. “People expressing their views are being killed. People are killed for eating what they want. People are getting threatening letters for voicing differences,” he said.
Incidents like the killing of rationalists, mob attacks over cow slaughter and beef-eating rumours and controversial pronouncements by members of the BJP or groups linked to it have been held up by opposition parties as examples of growing intolerance under the current regime. A number of writers, artistes and filmmakers have returned their national awards to protest against what they believe is PM Modi’s inadequate response to these incidents.
The BJP’s Meenakshi Lekhi, countering opposition charges, said: “This entire atmosphere is being created to malign the image of a democratically elected government, and that is why I call them intellectual mercenaries.”
Shortly before today’s business began, Left parliamentarians protested outside Parliament holding placards that read ‘Down with Communalism’.