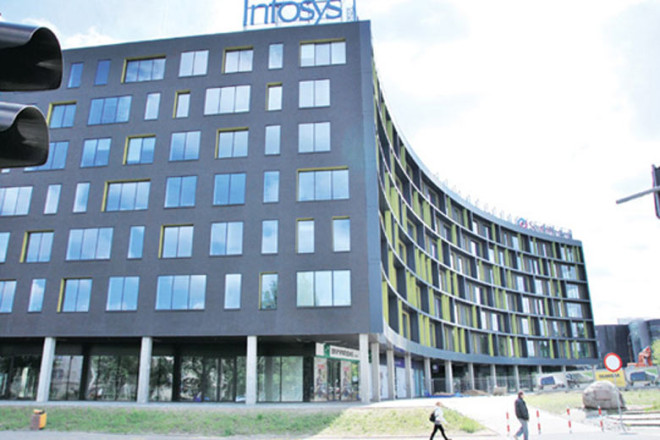 BANGALURU : The country’s second largest software services firm Infosys on Saturday said its board has approved a share buyback offer of up to Rs 13,000 crore. The buyback price of Rs 1,150 per share is nearly 25 percent higher than Friday’s closing of Rs 923.10 apiece.

The Bengaluru-based company in April had announced that it will pay up to Rs 13,000 crore to shareholders during the current financial year through dividend and/or share buyback. Share buybacks typically improve earnings per share and return surplus cash to shareholders, while also supporting share price during period of sluggish market condition.
Infosys had cash and cash equivalents worth over USD 3.5 billion on its books as of June 30, 2017.

The company has also set up seven-member committee comprising key members like Co-chairman Ravi Venkatesan, Executive Vice-chairman Vishal Sikka, interim CEO and MD UB Pravin Rao, among others to oversee the process of the buyback offer. The buyback offer approved by the board will comprise up to 11.3 crore equity shares or 4.92 percent paid-up equity share capital, Infosys said in a regulatory filing.
The development comes a day after Vishal Sikka quit as Infosys’ CEO amid founders alleging corporate governance lapses. The board had blamed a “misguided” campaign by co- founder NR Narayana Murthy for Sikka’s resignation.Infosys said its board would meet on August 19 to discuss and take a call on the share buyback plan as the company received Sebi’s approval for the same.

“We would like to inform you pursuant to Regulation 29 (1)(b) of the SEBI (Listing Obligations and Disclosure Requirements) Regulations, 2015, that the Board of Directors of Infosys Ltd will consider a proposal for buyback of equity shares of the company at its meeting to be held on August 19, 2017,” said the IT services firm in a filing to the BSE. Infosys said it would inform the outcomes of the board meeting to the exchanges.
Infosys, India’s second largest IT services firm, has closed the trading window with immediate effect and would reopen on August 22. Infosys proposed in April that it would pay up to Rs 13000 crore to buyback equity shares. The Bengaluru-based IT services major reported cash and cash equivalents and investments worth Rs 39,335 crore as on June 30, 2017 on its balance sheet and proposed its first share buyback.
As the IT services sector has seen a single-digit growth for the first time in a decade on account of automation and shift to digital technology, peers of Infosys such as TCS, Wipro, HCl Technologies have already announced share buyback plans. IT stocks across the industry have yielded sluggish returns during the past one year.
Infosys was awaiting regulatory approvals before it could take a call on the share buyback proposal. The company in February amended its articles of association that would allow it to go for a share buyback, a move watched by shareholders including its founders who had sought better capital allocation by the company.