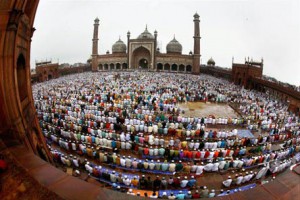 WASHINGTON: The world population of Hindus will grow rapidly between now and 2050, based on a relatively high expansion rate and the youth profile of this community. The largest global growth, however, will be among Muslims, outpacing the growth of every other religion’s population.
This was a key result of an in-depth study on “The Future of World Religions: Population Growth Projections, 2010-2050,” by the Pew Research Center, which sought to explain “Why Muslims Are Rising Fastest” in terms of the community’s higher fertility – 3.1 children per woman – and the fact that 34 per cent of Muslims are below the age of 15 years.
The Pew growth projections report says that India would retain a Hindu majority but would also have the largest Muslim population of any country in the world, surpassing Indonesia.
Worldwide, the Hindu population is projected to rise by 34 per cent over the period, from a little over 1 billion to nearly 1.4 billion, roughly keeping pace with overall population growth, the report noted.
The Hindu population’s fertility rate, at 2.4 children per woman, is second to the Muslim figure, but ranks above Jewish and Buddhist fertility, respectively at 2.3 and 1.6 children per woman.

Further, 30 per cent of Hindus are below the age of 15, which is lower than the corresponding number for Muslims, while at the other end of the age spectrum seven per cent of Muslims were above 60 years old in 2010 and the figure for Hindus was eight per cent.

The Pew study found that Muslims would nearly double their numbers in Europe to more than ten per cent by 2050 and would outnumber Christians worldwide by 2070, according to the forecast of the growth of religions around the world.
In North America, the Hindu share of the population was expected to nearly double in the decades ahead, the report’s authors said, up from 0.7 per cent in 2010 to 1.3 per cent in 2050, when migration is included in the projection models.
However, without including migration effects the Hindu share of the region’s population would remain “about the same.”