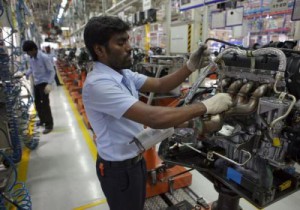 NEW DELHI: India’s manufacturing sector growth slipped further and touched a 22-month low in October largely due to a slower increase in new orders, but firms hired additional workers, a Nikkei survey has said.
The Nikkei India Manufacturing PMI — a composite monthly indicator of manufacturing performance — stood at 50.7 in October, down from 51.2 in September, reflecting a weaker improvement in business conditions across the sector.
A figure above 50 represents expansion while one below that means contraction.
“PMI data for October show a further loss of growth momentum across the Indian manufacturing economy, with a slower rise in new business inflows resulting in a weaker expansion of output,” Pollyanna De Lima, Economist at Markit and author of the report, said.
Despite the slowdown in new order growth, manufacturers recruited additional workers in October. Employment rose for the first time since January, although only marginally.
“Undeterred by tough economic conditions overall, firms took extra staff in October. This, combined with a further drop in inventories of finished goods, suggests that production growth may rebound in coming months,” Lima added.
On prices, the report said October saw inflationary pressures return to India’s manufacturing economy. Average purchase costs rose amid reports of higher metal, paper and food prices. The rate of increase was, however, only “slight”, the survey said. Part of the additional cost burden was passed on to clients as tariffs were raised.
“Nonetheless, the rate of charge inflation was marginal overall,” Nikkei said.”A return to inflationary pressures, meanwhile, indicates that RBI may pause its loosening cycle for the rest of the year following a 50-bps cut of the key repo rate in September,” Lima said, adding that “upcoming survey data will show how effective the central bank s effort to revive the economy has been”.
Reserve Bank Governor Raghuram Rajan on September 29 effected a more-than-expected interest rate cut of half a per cent to spur the economy.Moreover, RBI has also lowered its economic growth forecast for the current fiscal to 7.4%, from its previous projection of 7.6%.
The April-June quarter GDP slipped to 7%, from 7.5% in the preceding quarter.