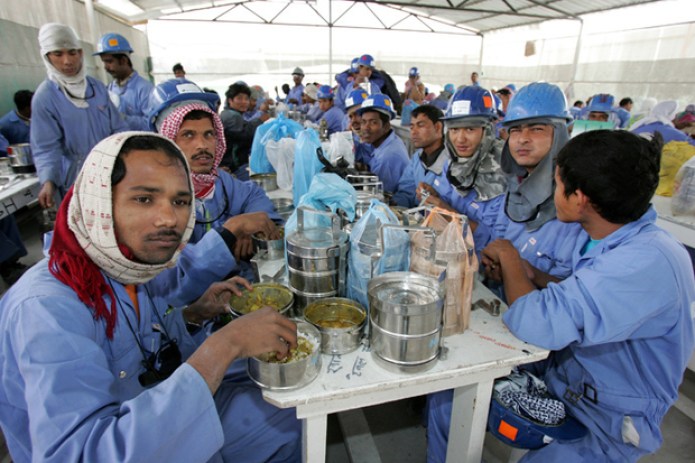 DOHA (Qatar) :  Ajit, an Indian electrician, is just seven months into his new job but right now he is a worried man, like many other members of the huge migrant workforce in Qatar. He frets not only about his job, his future in the country but also the price of food.

“If this continues, there will be problems for people like us, the workers. The price of food will go up and there will be no jobs,” he told AFP. He was referring to the diplomatic crisis in the Gulf that has seen Qatar isolated after regional giant Saudi Arabia and several allied countries cut all ties to Doha.

Ajit earns 1,000 riyals a month ($275, 240 euros), of which he sends 600 home to his family. He worries he won’t be able to do that for much longer.”In some supermarkets, the price of rice, tomatoes and onions has increased,” he said. “Where I was spending one riyal on each item, now it is double that.”Ajit has come up with a solution to cope with the rising food prices in Doha — cut down to just one meal a day.
‘Maybe send us home’
The 31-year-old is typical of the nervous migrant workforce.As the crisis imploded, discussion has largely focused on the political and security aspects of the row between some of the globe’s richest countries in one of the world’s most volatile regions. But outside the corridors of power, it is Qatar’s foreign workforce – totalling more than two million, mostly from south Asia — who are on the frontline when it comes to the immediate impact of the crisis.
While Qatar’s Western expats are likely to ride out the economic impact, there is no such luxury for Ajit and his colleagues. The rising price of staple foods is just one of their fears. Concerns are also growing about job security and the lack of much-needed overtime as economic uncertainty grows, due to what Doha has labelled the “blockade” imposed by neighbouring countries.”I have heard people saying there will be no more jobs in Qatar,” added Ajit.
A short distance away stood Anil, a 32-year-old scaffolder from Bangladesh, in blue overalls and a purple face-cover to shield from the fierce summer sun. He was resting after a morning of labour in heat of 48 degrees Celsius (118 Fahrenheit) in the rundown Doha suburb of Mshereib that is being transformed into a gleaming cafe, hotel and business area ready for the 2022 football World Cup.

“Everybody is talking about this problem (the crisis),” said Anil, 32. “Some people are saying they may send us home.”In just one week since Qatar was cut off, Anil said the price of the apples he buys has more than doubled, from seven to 18 riyals per kilo (two pounds).Bad timing”I’ve heard Qatar is supporting terrorists and that’s why they’ve been blockaded,” said Abdulbariq, 38, an electrician.

The Bangladeshi uses the money he earns — 820 riyals a month — to send his two daughters to school in India.”This will affect them,” he fears.The Gulf crisis could not have hit the workforce at a worse time.Because of the Muslim fasting month of Ramadan, working hours have already been reduced and there is no chance to make up any shortfall through overtime. That though is only a temporary measure.
Although Qatari officials have, so far, confidently shrugged off the economic impact of isolation, that view is not shared on the country’s many construction sites.

“I have a father, brother, mother and sisters to look after, I send home 1,500 riyals a month,” said Noor-ul-Islam, a 26-year-old mason from Bangladesh.”Definitely there will be problems for my family if this crisis continues.”
(Except for the headline, this story has not been edited by staff and is published from a syndicated feed.)