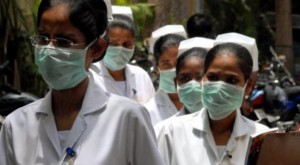 NEW DELHI: 46 Indian nurses stranded in Tikrit in war-torn Iraq have been moved to another location and are in ISIS captivity.”They are on the move right now. They agreed to shift for their own safety,” foreign ministry spokesperson Syed Akbaruddin said, adding that their destination was “not known” at present.
“It is not a situation of our choice. It is a difficult situation,” he said. The ministry did not confirm whether the nurses were being shifted by the militants who have taken control of the town.The ISIS or Islamic State of Iraq and the Levant has reportedly taken the nurses to treat their men in Mosul, another captured town.
On whether the nurses, who had been living in a hospital since the conflict broke out last month were now in captivity, Mr Akbaruddin said, “There is no free will in zones of conflict.”He asserted, however, that the Indian government was in constant touch with the nurses, “including 10 minutes before I came.”The nurses had been pressured by militants to board buses and leave the hospital.
The Iraqi army is locked in a fierce battle with Sunni militants to retake Tikrit, the hometown of former Iraqi president Saddam Hussein. The foreign ministry denied reports of the hospital being bombed, but said some nurses had suffered “minor injuries” while shifting.A concerned Kerala Chief Minister Oommen Chandy today met Foreign Minister Sushma Swaraj to discuss moves to rescue the stranded nurses.
“I have no idea where the nurses are right now exactly. They spoke to me as soon as they boarded a bus,” Mr Chandy told reporters.
Some 900 Indians are ready to return and are being flown out of Iraq.
Evacuating Indians from Iraq is the first serious foreign policy challenge for the new government of Prime Minister Narendra Modi, with relatives in India demanding swift action.”India is not alone in working on this; we have partners inside and outside Iraq,” Mr Akbaruddin said.
About 10,000 Indians work in Iraq, mostly in areas unaffected by the fighting between the Islamic State of Iraq and the Levant (ISIL) insurgents and government forces.