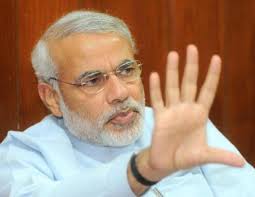 NEW DELHI : In his first ever interview since assuming office, Prime Minister Narendra Modi has defended Indian Muslims and said their patriotism cannot be questioned.Speaking to Fareed Zakaria of CNN, Modi asserted that Indian Muslims will live for India and die for India and will not want anything bad for India.
Responding to a question on al Qaeda chief Ayman al-Zawahiri’s recent announcement on creating India/South Asia specific branch of the terror outfit and that he wanted to free Muslims from the oppression they face in Kashmir and Gujarat, the Prime Minister said, “My understanding is that they are doing injustice towards the Muslims of our country.”“If anyone thinks Indian Muslims will dance to their tune, they are delusional. Indian Muslims will live for India, they will die for India – they will not want anything bad for India,” he added.
Asked about his opinion on why al Qaeda has not found favour with India’s 170 million Muslims, Modi said, “ Firstly, I’m not the authority for doing a psychological and religious analysis on this. But the question is whether or not humanity should be defended in the world. Whether or not believers in humanity should unite. This is a crisis against humanity, not a crisis against one country or one race. So we have to frame this as a fight between humanity and inhumanity, nothing else.”
Talking about the Indo-US relationship, Modi expressed confidence that both the countries can develop a genuine strategic alliance.”The Indo-US ties should not be seen within the limits of Delhi and Washington: Both the countries realise that their ties are in a much larger sphere,” he said.