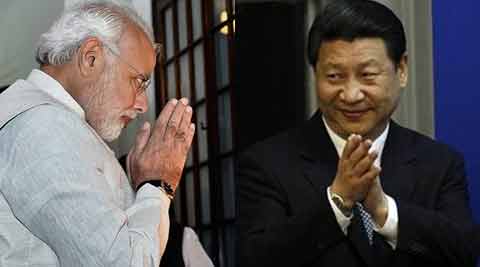 NEW DELHI :  India is unlikely to send any representative to China’s big “One Belt One Road” summit beginning Sunday, in effect to a boycott of Beijing’s ambitious initiative for cross border connectivity through ports, railways and roads.
One part of the project called the CPEC (China-Pakistan Economic Corridor) runs through Pakistan-occupied Kashmir. India has strongly objected to this project, maintaining that PoK is a part of India, not Pakistan.The Ministry of External Affairs has not officially commented today on participation in the two-day meeting. Foreign Ministry spokesperson Gopal Baglay earlier this week told reporters that the government hadn’t taken a decision yet.
“You know that our position is that since the so-called CPEC forms a part of OBOR, that is where our difficulty is,” Mr Baglay had said. “It passes or proposes to pass through what is sovereign Indian territory and we have made our views in this regard very, very clear to the Chinese side.”

But Beijing has brushed aside Indian concerns. Last week, the China’s ambassador to India, Luo Zhaohui, asked New Delhi to look at the project from the prism of economics, and not sovereignty.Leaders of 29 countries plus senior delegates from other nations gather in Beijing for a two-day summit for the road project that stretches from China to Europe with infrastructure projects in between. The initiative involving hundreds of billions of dollars over the coming decades is expected to cement China’s dominance over Asia, including in India’s neighbourhood.
Sri Lanka, Nepal and Pakistan are already attending. The US too has decided to attend, marking a U-turn in its position that is seen as a symbolic boost for the summit. China’s economy is nearly five times the size of India’s.
India, which is Asia’s third largest economy behind China and Japan, sits near one of the world’s busiest shipping lanes in the Indian Ocean. For Delhi not to be part of the continent-wide project presents a headache for both China and India.
Delhi is upset over China’s refusal to allow it entry into the Nuclear Suppliers Group (NSG), a global cartel that controls nuclear trade, and over Beijing blocking a request at the UN to sanction Masood Azhar, the Pakistan-based head of terror group Jaish-e-Mohammed, which has attacked military bases in India.ndtv.