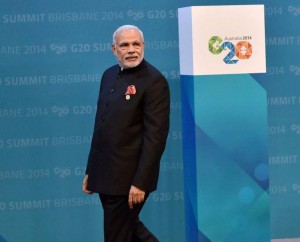 NEW DELHI:  India is set to be the G20 Chair in 2018, and New Delhi could host the prestigious annual G20 summit.The G20 member nations took a decision on the Chair for 2018 earlier in September, a top Finance Ministry source told The Hindu. “China is chairing the G20 this time, following which Germany will in 2017 and then … the Chair will pass on to India for 2018.”
The G20 operates as a forum and not as an organisation. Therefore, it does not have any permanent secretariat or management and administrative structure. One of the G20 countries is selected to hold the Chair in rotation, also known as ‘G20 presidency’.

The presidency establishes a temporary secretariat for the duration it holds the Chair. The secretariat coordinates all work and organises G20 meetings.
The immediate past, present and next Chair constitute a ‘troika’ and ensure continuity in the G20 work. In the current year (2015), the presidency is held by Turkey. The Chair was handed over to it by Australia. Turkey will hand over the Chair for the next year (2016) to China. After China, Germany will hold it in 2017.
For selecting presidency, a system has been in place since 2010, when South Korea held the Chair. Under it, 19 countries have been categorised into five regional groupings of a maximum of four nations each.
The chair rotates among the groups, and one country from a group is selected for a specific year. Group 1 comprises Australia, Canada, Saudi Arabia and the U.S. Group 2 consists of India, Russia, South Africa and Turkey.
Group 3 has Argentina, Brazil and Mexico. Group 4 has France, Germany, Italy and the U.K. Group 5 has China, Indonesia, Japan and South Korea. In 2010, South Korea in Group 5 was the chair. In 2011, France in Group 4 was the chair. In 2012, Mexico in Group 3 was the chair. In 2013, Russia in Group 2 held the chair.
Each member of G20 is represented by its head of state at the Leaders’ Summit. Leaders are assisted by their Finance Ministers and Central Bank Governors, and Sherpas. India recently announced the appointment of NITI Aayog Vice-Chairman Arvind Panagariya as G20 Sherpa.
Specific G20 ministerial meetings, like those of G20 Agriculture Ministers, Labour Ministers and Trade Ministers, are organised on specific themes of importance as identified by the G20 leaders or the G20 presidency.
The outcomes of these meetings feed into the Sherpas’ track and subsequently to the leaders’ declaration.