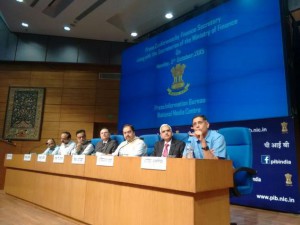 NEW DELHI: India will grow at a rate faster than 7.5 per cent, said Shaktikanta Das, Economic Affairs Secretary, at a press conference in Delhi on Monday.
Black money disclosure has been revised upwards from Rs. 3770 crore to Rs. 4147 crore, said Hasmukh Adhia, Revenue Secretary. Mr. Adhia said, “India has sent 1,600 requests for information for black money investigations to other countries this year.”
Addressing the media on the government’s economic progress since the Union Budget, he added that the rate cuts by the RBI will improve the housing and other economic sectors. But, Mr. Das also said that the government won’t ask PSU banks what to do on passing on RBI’s rate cuts to borrowers as they’re autonomous. The government, he said, is looking to review the various current interest subsidies to aid transmission of the RBI’s rate cuts.

Finance Secretary Ratan Watal said that the government is on course to achieve the fiscal deficit target outlined in the Budget. Mr. Watal mentioned that India’s macroeconomic fundamentals are strong, and that the 7 Pay Commission’s recommendations, which come into effect from January 1, 2016, will not impact the fiscal deficit.
The total direct tax collections until September has gone up by 12 per cent, compared to the corresponding period last year, and indirect tax collection until August by 36 per cent, said Mr. Adhia. “Higher tax collections show improving demand in the economy,” he stated.
Chief Economic Advisor Arvind Subramanian remarked that revenue estimates used to be “over-optimistic” earlier, but are realistic this year.