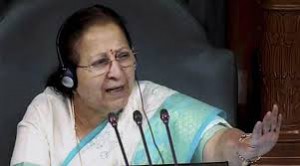 NEW DELHI: India will boycott the Commonwealth Parliamentary Union meeting scheduled to be held in Islamabad next month, in protest against Jammu and Kashmir Assembly speaker not being invited by the hosts.
Lok Sabha Speaker Sumitra Mahajan Friday said, a meeting of Speakers of all States has unanimously decided to boycott the meeting of the Commonwealth Parliamentary Association, CPA, and said India is also writing to CPA Chairperson regarding this matter.

Meanwhile, Jammu and Kashmir Assembly Speaker Kavinder Gupta, thanked his fellow Speakers for the decision saying it was a question of unity and integrity of the country.
New Delhi has further said that unilateral decision of Pakistan not to invite Jammu and Kashmir Assembly Speaker for CPA violates the CPA Constitution. In a statement, External Affairs Ministry Spokesperson Vikas Swarup, said the denial also goes against the guiding principles of the Commonwealth.