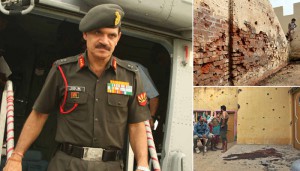 JAMMU: Indian has warned Pakistan that it is not afraid of escalation after relentless firing and shelling from across the border this week, in which eight civilians have been killed and around 50 injured.
The Indian forces have been asked to retaliate heavily and reject talks until all firing from Pakistan stops, top government sources say. As Pakistan continues to violate ceasefire along the Jammu and Kashmir border, Army Chief General Dalbir Singh Suhag on Wednesday said that India is giving efficient as well as appropriate response to the Pakistani troops.
The Army Chief’s comments came as the Pakistani troops targeted 50 security outposts and three dozen hamlets with heavy mortar shelling and firing overnight along the entire 192-km international border in Jammu and Kashmir.
According to reports, India has responded strongly, conveying the Indian leadership’s resolve and ability to deal with Pakistan. New Delhi has cleared that talks with Islamabad will not be possible unless Pakistan stops violating ceasefire at border.
In retaliation to Pakistan targeting civilian habitations in Jammu and Kashmir, the Union Home Ministry today put on hold a scheduled flag meeting between Pakistan and Indian paramilitary forces to discuss the recent hostilities.
Extending the ceasefire violations to new areas, the Pakistan Rangers shelled border outposts (BoPs) and villages in Samba and Kathua along with Jammu during the night and the firing was continuing till Wednesday morning.
A woman was killed in the shelling in Jaladi village in Samba while 11 people, including three BSF personnel, were injured, a BSF spokespersons said today.
So far, seven persons have been killed and nearly 70 injured in the escalation since October 1 with over 16,000 people migrating to safer areas in these districts.
There have been over two dozen ceasefire violations along Indo-Pak border in Jammu and Kashmir since October one.