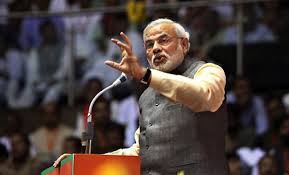 NEW DELHI : The BJP has reacted sharply to an article in The Economist that describes Narendra Modi as a divisive man and “recommends” to Indians a Rahul Gandhi-led government as an uninspiring but “less disturbing” option.The BJP’s Mukhtar Abbas Naqvi said, “Let them write what they want to. They don’t know the ground realities. The country is fed up of Congress rule and people want a Congress-free India and good governance under Modi.” The party’s Nirmala Sitharaman had earlier tweeted, “What a let-down, The Economist lacks objectivity and is patronizing.”
The article, which comes just three days before India begins voting in a nine-phase national election, says, “Mr Gandhi’s coalition is tainted by corruption. By comparison Mr Modi is clean. So there is much to admire. Despite that, this newspaper cannot bring itself to back Mr Modi for India’s highest office. “We do not find the prospect of a government led by Congress under Mr Gandhi an inspiring one. But we have to recommend it to Indians as the less disturbing option.”
In the article, titled “India Deserves Better than Modi”, The Economist ascribes its reservations about Mr Modi to the 2002 riots in Gujarat, the state he has ruled since 2001. A Supreme Court inquiry has said there is no evidence of his role, which was upheld by a trial court last year.
The Economist disputes the clean chit. “One reason why the inquiries into the riots were inconclusive is that a great deal of evidence was lost or willfully destroyed. And if the facts in 2002 are murky, so are Mr Modi’s views now.”The article continued, “If Mr Modi were to explain his role in the violence and show genuine remorse, we would consider backing him, but he never has.”It also said if BJP won the election, its coalition partners should hold out for a prime minister other than Mr Modi.
“And if they still choose Mr Modi? We would wish him well, and we would be delighted for him to prove us wrong by governing India in a modern, honest and fair way. But for now he should be judged on his record – which is that of a man who is still associated with sectarian hatred. There is nothing modern, honest or fair about that. India deserves better.”
The article has set Twitter abuzz. “#Economist #TheEconomist john micklethwait, nobody cares about your opinion on @narendramodi . He will win whether you like it or not!” tweeted Vivek Kumar Singh.”Can anyone stop Narendra #Modi? Err Maybe the Indian Voter? But the #Economist thinks otherwise,” wrote Ramesh Sharma.