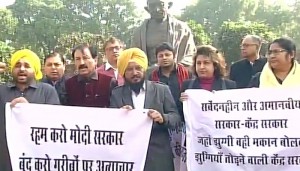 NEW DELHI: The demolition of hundreds of homes in a slum cluster in west Delhi in which a six-month-old baby allegedly died, touched off a political storm on Monday with Delhi’s ruling Aam Aadmi Party (AAP) targeting the Centre and Congress leader Rahul Gandhi attacking them both.
Union minister Venkaiah Naidu admitted that “the demolition should not have happened in winter. I have conveyed this to the railway minister.”
Rahul Gandhi made a high profile visit to the Shakur Basti area, where thousands of people have been left homeless in the cold after the slums were razed on Saturday by the railway police allegedly to make way for a terminal.
“Whenever a slum is about to be destroyed here, call Rahul Gandhi, he won’t let this happen,” Mr Gandhi assured residents flocking around him.
“We will try to help you. As you know we are not in the government, it is AAP’s and BJP’s government. But we will do whatever we can,” he promised.Mr Gandhi made it clear that he believed AAP, which governs Delhi, also had a role, though Arvind Kejriwal’s party has blamed the railway police, which reports to the Centre.

“Why are they (AAP) protesting? They are in power,” Mr Gandhi said on AAP protests at Parliament.Chief Minister Kejriwal retorted in a tweet that “Rahul Gandhi is still a kid. His party has probably not informed him that railways comes under the central government and not under the Delhi government.”
AAP alleges that no warning was given to people before some1,000 homes were razed.A six-month-old baby, Rukaiya, allegedly died in the chaos when her family was trying to pack up their belongings and run out.
“As the officials came knocking, we started quickly packing our belongings. In the mess we did not realise when a heap of clothes fell on her, and she died,” said Mohammad Anwar.
“My child, who had just started seeing the world, would have been by my side today if the officials had shown generosity and given us little time and a warning,” added Anwar, who has two more children, a daughter, 5, and son, 3.
Railway Minister Suresh Prabhu said in Parliament that the child had died much before the demolition started, and that the residents had been given repeated warnings.