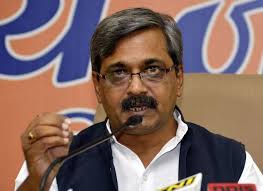 NEW DELHI : Responding to Aam Aadmi Party’s rhetoric, Delhi Bharatiya Janata Party chief Satish Upadhyay on Tuesday accused the Arvind Kejriwal-led political outfit of betraying the people of Delhi. Addressing the media, Upadhyay came down heavily on AAP saying that because of their lust for power Delhi is witnessing such a situation.
Clarifying his party’s stand on the issue of government formation of Delhi, Upadhyay said, “From day one BJP made it clear that if Lt Governor Najeeb Jung wants polls in the national capital we were ready for it.” However, the Delhi BJP chief went on to say that if his party gets an invitation from the Lt Governor to form government in Delhi then the BJP has the right to critically analyse the situation and take a call.
Upadhyay’s recation came after Kejriwal today dared the BJP to contest polls in Delhi. While asking the BJP to contest polls, Kejriwal said, “Why is BJP afraid of contesting elections in Delhi when it has its own government at the Centre and also won all seven Lok Sabha seats in the national capital.
” The AAP on Monday released a video showing a BJP leader offering money to one of its legislators, inducing him to quit the Assembly to improve the BJP’s chances of forming a government in Delhi. The grainy video shot covertly shows Delhi unit vice-president Sher Singh Dagar making the bribe offer to AAP’s Dinesh Mohaniya if he resigned so as to bring down the effective strength of the hung Delhi Assembly. Earlier today, the Supreme Court asked the Centre to apprise it by October 10 about the outcome of political process initiated by Lt Governor by writing a letter to the President on exploring the possibility of government formation in Delhi.
A five-judge Constitution Bench, headed by Justice HL Dattu, said that it is not going to keep this matter pending for a longer period of time and asked the Centre to inform it about the decision to be taken by the President of India on the LG’s letter. The apex court granted four weeks time to the Centre and directed it to file its response by October 10. Last week, Jung sent a report to President seeking permission to call the single largest party to take a shot at power though it is well short of majority in the Assembly. In his report, Jung gave a detailed analysis of the political situation in the city and underlined the need to have an elected government in the city which is under President’s rule since February 17 following resignation of the Aam Aadmi Party government which was in power for 49 days.
The Lt Governor said though no party has staked claim to form government in Delhi, the BJP could be invited to take the reins as it is the single largest party in the Assembly. The apex court had earlier asked the Centre to take a decision on holding assembly elections in Delhi in response to the AAP’s petition asking for the dissolution of the Assembly and fresh polls. Both AAP and Congress have been demanding immediate dissolution of the Assembly, saying keeping it in suspended animation will encourage horse-trading. In the 2012 Delhi polls, while BJP had won 31 seats in the 70-member house, AAP had won 28 seats and Congress managed to bag only 8. BJP, the single party has 28 MLAs in a House of 70.
Its ally Akali Dal has one MLA. BJP had won 31 seats but three party legislators Harsh Vardhan, Ramesh Bidhuri and Pervesh Verma were elected to Lok Sabha and had to resign their Assembly seats. Delhi has been under President’s rule since February 17 following resignation of Arvind Kejriwal-led-AAP government which was in power for 49 days. The government led by Kejriwal had resigned on February 14 after the party’s pet project, the Janlokpal Bill, could not be passed due to opposition from BJP and Congress. President’s Rule was imposed in Delhi on February 17. The Lt Governor had not favoured dissolution of the Delhi Assembly as recommended by the Council of Ministers headed by Kejriwal and kept the Assembly in suspended animation.