I&B secretary to appear before Press Council on April 22 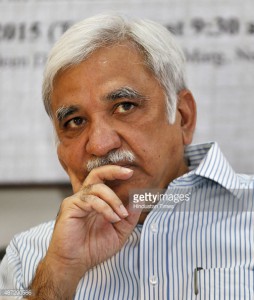 NEW DELHI: Information and Broadcasting Secretary Sunil Arora, against whom bailable arrest warrant was issued by the Press Council of India (PCI), has now been asked to appear before the panel on April 22.
“A request has come from the ministry that since the secretary is out of India, he may be given time to make personal appearance before the Press Council of India. So, the secretary will now appear before the PCI on April 22,” an informed source told IANS here.
“The Press Council has been quite concerned over several issues concerning the freedom of the press and related matters for the last few months. On some issues, the PCI was in touch with the information and broadcasting ministry. Finally, the Press Council decided to summon its secretary for certain clarifications. But since he did not turn up, the PCI issued an arrest warrant against him,” Press Council member Rajeev Ranjan Nag said.

The Press Council is a quasi-judicial statutory body, set up by an act of parliament, for preserving press freedom and maintaining and improving the standards of newspapers and news agencies in India.
The PCI is mandated to keep a check on developments which have the tendency to affect the press freedom.