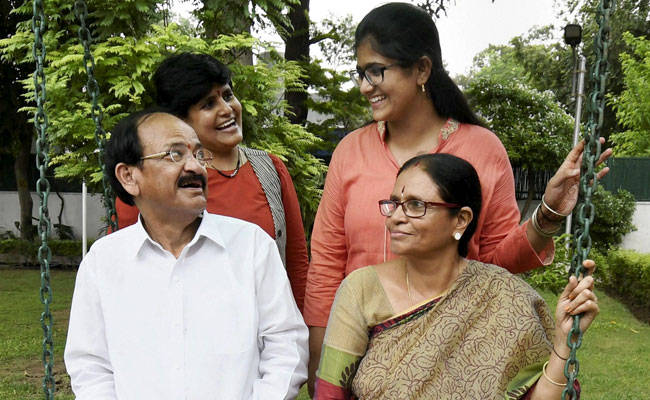 NEW DELHI :  Muppavarpu  Venkaiah Naidu, the candidate of the Bharatiya Janata Party, was on Saturday elected as the 15th Vice-President of India. He secured a total of 516 votes as against Opposition candidate Gopalkrishna Gandhi’s 244.Of the 771 votes polled today, 770 were valid and 11 invalid. 14 lawmakers were absent from voting. 90 per cent votes were polled within the first two hours, till 12 pm. Mr Naidu, who defeated Mr Gandhi with a margin of 272 votes, received more than two-third votes.
Prime Minister Narendra Modi, who was among the first to cast their votes in Parliament, congratulated Mr Naidu on the big win. “I am confident M Venkaiah Naidu will serve the nation as a diligent and dedicated Vice President, committed to the the goal of nation building,” he tweeted.

“This is a victory of the ballot, and also of free speech. The second victory belongs to all of India,” Gopalkrishna Gandhi said, flanked by Congress’ Ghulam Nabi Azad and CPM’s Sitaram Yechury.  Thanking all parliamentarians who voted for him, Mr Gandhi said “I believe the number is beyond certain calculations.” Ghulam Nabi Azad said, “Opposition will never compromise on ideology whether we face defeat or victory.”
He will be the third vice-president from Andhra Pradesh. The list includes Sarvepalli Radhakrishnan and VV Giri, both of whom later became President. He was elected to the Rajya Sabha thrice from Karnataka and once from Rajasthan.The veteran leader served as the BJP national president from July 2002 to October 2004. He quit the post after the party’s defeat in the 2004 Lok Sabha elections.

Mr Naidu served as the Rural Development Minister in the NDA government headed by Atal Bihari Vajpayee. In PM Narendra Modi’s government, he held the portfolios of Parliamentary Affairs, Information and Broadcasting and Urban Development. Though Mr Naidu is from the South, he learnt Hindi and addressed many rallies in north India. He is an enthusiastic proponent of Hindi as the national language.
Coming from an agricultural family of Andhra Pradesh’s Nellore district, Mr Naidu started his political career in 1973 as a student leader and later joined the Jan Sangh.He was elected twice to the Andhra Pradesh Legislative Assembly

The total strength of the two Houses is 790, but there are two vacancies in the Lok Sabha and one in the Rajya Sabha. BJP MP in Lok Sabha Chhedi Paswan is barred from casting vote following a judicial pronouncement. In the 545-member Lok Sabha, the BJP has 281 members. The NDA led by BJP, has 338 members. In the 245-member Rajya Sabha, the BJP has 58 members making it the single-largest party, while the Congress has 57.