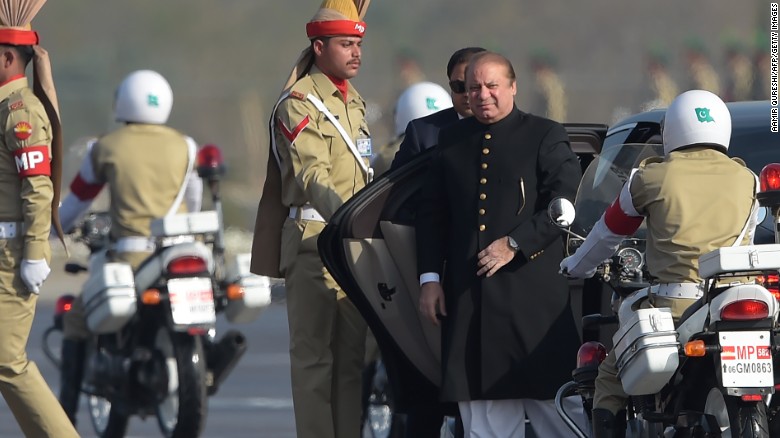 LAHORE/ISLAMABAD : Pakistan’s Defence Minister Khawaja Asif on Saturday emerged as the “most potential candidate” to replace beleaguered Prime Minister Nawaz Sharif if he is disqualified by the Supreme Court for alleged graft and money laundering in the sensitive Panama Papers case.

Asif is most likely to become the interim prime minister for 45 days till 67-year-old Sharif’s wife Kalsoom or brother Punjab Chief Minister Shahbaz Sharif is elected on a National Assembly seat to lead the government for the remaining term, according to a top PML-N leader.

He said it was discussed during back-to-back consultative meetings held by Sharif with his legal team and close aides after the apex court reserved its verdict yesterday. During a high-level meeting, it was decided that one of the three PML-N leaders could be made premier for ’45 days’.The other two candidates shortlisted are National Assembly Speaker Sardar Ayaz Sadiq and Petroleum Minister Shahid Khaqan Abbasi.
Since Kalsoom or Shahbaz are not a member of the National Assembly — the lower house of the Parliament — they cannot succeed him immediately and would have to contest elections and win a seat.
Asif is very close to Sharif and considered anti- establishment.
“The prime minister’s legal team briefed him about the apex court’s proceedings and possible verdict. As there are chances of the premier’s disqualification, Sharif discussed his replacement as well. Khawaja Asif, Sardar Ayaz Sadiq and Shahid Khaqan Abbasi are shortlisted for the slot of the prime minister,” the PML-N leader told PTI.
“If Sharif is ousted by the Supreme Court there will be strong resentment in the ruling party?against the establishment whom the PML-N believes to be involved in conspiracies against the premier. And Asif will be a perfect choice to give a befitting gesture?to the establishment for its conspiracies,” the PML-N?leader said on anonymity.
Sharif and his cabinet members have been alleging for weeks that conspiracies are being hatched to oust Nawaz Sharif. They openly blamed the military establishment and judiciary behind the plot for Sharif’s ouster. So far Sharif has refused to quit, calling the investigators’ report a compilation of “allegations and assumptions”. His decision to stay in power was endorsed by the federal Cabinet last week.

It was also decided during the meeting that the party will utilise all legal and constitutional options available if the verdict goes against the premier. The meeting, chaired by Sharif, was also attended by Shahbaz along with federal ministers, advisers and the legal team representing the Sharif family in the Panama Papers case.
The meeting reviewed the situation following developments in the Supreme Court.Meanwhile, Asif rebuffed the reports about him becoming the interim prime minister.”The entire party is behind the leadership of Sharif. There is no any prime ministerial candidate. There has been no discussion in the meeting on this issue,” he said.
Despite receiving adverse remarks during the court proceedings which the opposition parties believe a clear indication that the premier is going to get disqualified, Sharif reiterated his stance that he will not quit office.”I will not quit on the demand of opposition as I am elected by the people of Pakistan,” Sharif said. He, however, said he would accept the court’s decision.
Opposition Leader in National Assembly Khursheed Shah today said that Sharif has only time till tomorrow to resign.”He has two nights to decide about his resignation. His disqualification is a writing on the wall and he should honourably exist. The judges? remarks in Panama case has already foretold the court?s decision,” he said.
The apex court yesterday concluded hearing the sensitive Panama Papers case against Sharif and his family for alleged corruption and money laundering.The judgement was reserved after counsels of both sides concluded their arguments before a three-judge bench of the apex court headed by Justice Ejaz Afzal Khan.
A six-member JIT was set up in May by the apex court with the mandate to probe the Sharif family for allegedly failing to provide the trail of money used to buy properties in London in 1990s.The JIT has recommended that the report’s Volume-X should be treated as confidential as it contains the details of correspondence ( with other countries.with Agency inputs).