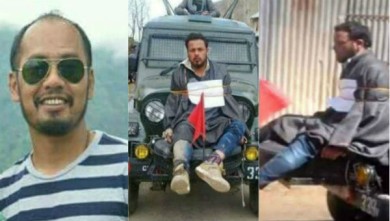 SRINAGAR: “If it was his (the Army Chief’s) relative instead of me, will he still award the officer,” asked Farooq Ahmad Dar, who was tied to an Army vehicle and used as a human shield by Major Leetul Gogoi.
Mr Dar, responding to the award of a commendation certificate issued by Army chief General Bipin Rawat to Major Gogoi, termed it as “support to zulum (oppression).”

“I was not a stone- thrower. I had voted that day. I was kept thirsty from 10.45 a.m. till 7.30 p.m. I was driven around 28 km in various villages. I was used as a shield,” Mr. Dar, a weaver, told The Hindu. A resident of Budgam’s Chill village, Mr. Dar was tied to an Army vehicle by the officer on April 9 during the Srinagar by-polls to escape stone throwers.
“The Army is not lying when it says no one pelted stones after I was tied (to the vehicle). Is the Army here to provide security to us or to their jawans only,” asked Mr. Dar, who remained in his village since the incident.The 27-year-old villager said he still gets nightmares. “I see a jeep travelling towards me whenever I fall asleep. My body starts shaking. My mother sleeps next to me, calming my pain and restlessness. This anxiety will end only when I will die,” he said adding “My mother too is depressed by the event”.
Terming April 9 as his “new date of birth”, Mr Dar only pleads for “insaaf (justice)” now to put a closure to his case.“Whatever is the punishment in the rule book, please follow that. I recently deposed before the State Human Rights Commission (SHRC). I was expecting some reprimand. Instead, he was awarded. Am I a bail (ox) or a human being,” Mr Dar said. Regretting his decision to have voted on that day, he has pledged “not to vote again”.
“One can only imagine what the Army could do to those who don’t vote. My case is an eye opener,” he said.Meanwhile, Inspector General of Police, Kashmir, Munir Ahmad Khan said the investigation in the case “will carry on”. “The FIR against the Army Major has not been quashed,” IGP Khan said.

National Conference spokesman Junaid Mattu said, “The Major being honoured is a slap across the mainstream (political parties) in Kashmir. I feel ashamed, disgusted and hopless.”Hurriyat chairman Syed Ali Geelani said the Army act “clearly vindicates our claim that this is State sponsored policy”.

“We are looking for International Court of Justice intervention like in the Kulbhushan Jadhav case. It was a severe crime against humanity,” said Mr. Geelani.Mirwaiz Umar Farooq, Hurriyat faction chairman, said, this award only underlines that “all enquiries are a farce”.“Fascist mindset is on a display in India while dealing with people of Kashmir. The Indian state has internalised the occupational mindset,” he said.(The Hindu).