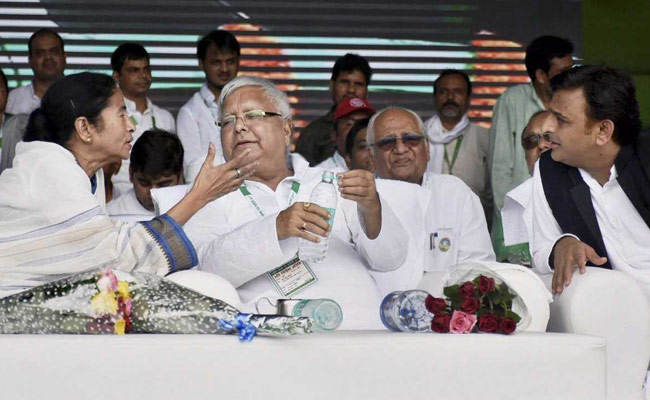 PATNA:  In a show of strength against Prime Minister Narendra Modi and friend turned foe Bihar Chief Minister Nitish Kumar, RJD president Lalu Prasad Yadav is holding a rally at iconic Gandhi Maidan today. Besides Sharad Yadav — who was removed as the leader of Janata Dal (United) in Rajya Sabha after his open disapproval of Nitish Kumar’s alliance with the BJP — and Akhilesh Yadav, the other key leader present at the rally today was Bengal Chief Minister Mamata Banerjee.

The Congress was represented by Leader of Opposition in the Rajya Sabha Ghulam Nabi Azad and party general secretary CP Joshi. The Rashtriya Janata Dal chief, who was dumped last month by Nitish Kumar, however, showed he still had enough command over his supporters. Around 2 lakh people attended the rally today, wildly cheering Lalu Yadav and his two sons — Tejashwi and Tej Pratap Yadav, who had been ministers in Nitish Kumar’s government.
At his grand anti-BJP rally in Patna, Lalu Yadav today vented ire on former ally Nitish Kumar, saying he had agreed to let Mr Kumar be the Chief Minister only after “pressure” from ally Sharad Yadav and  Samajwadi Party patriarch Mulayam Singh. “I knew Nitish was not the right person, but the situation was such that I had to do it (enter the Grand Alliance) keeping in mind the state of affairs in the country,” Lalu Yadav said. 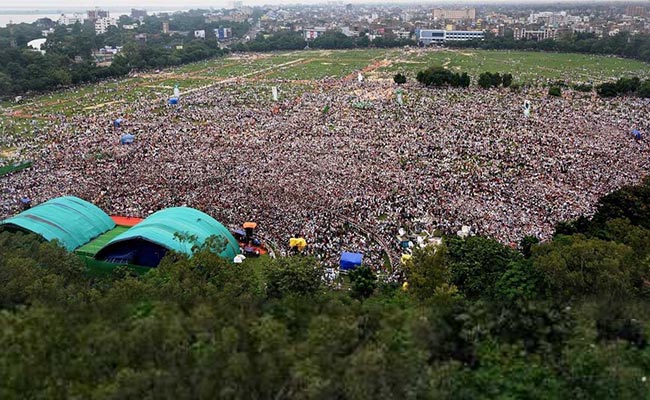 “I never agreed to Nitish being the Chief Minister.” Mr Kumar had junked the Grand Alliance last month to join hands with old ally BJP. The promised mega-platform of the opposition at Patna’s Gandhi Maidan had shrunk, with some of the key opposition leaders, including Congress’s Sonia Gandhi, Rahul Gandhi and Dalit powerhouse Mayawati giving it a miss.

Last week, Rahul Gandhi left for the Norwegian capital Oslo on a trip to meet political and business leaders. Mayawati said she would not attend since the history of such experiments has not been heartening and accused other parties of “back-stabbing” the BSP.

As Tejashwi Yadav — who is now the leader of opposition, emerged as the details man of the rally — his brother, who was seen to have been overshadowed by him, made his mark as a speaker. Taking the stage after Sharad Yadav, Tej Pratap Yadav introduced himself as the “Krishna” to Younger brother Tejashwi’s “Arjun”.  Echoing his father, he said, “I will tear apart the BJP”. He even blew a conch shell – a signature of his father in his younger days – saying, “Now I’m calling for a war”.