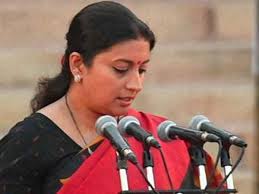 NEW DELHI : The controversy over Human Resource Development (HRD) Minister Smriti Irani’s educational qualifications has taken a new turn with her asserting that she holds a degree from Yale University in US.Ms Irani (38) made the remark when pressed by a questioner at a summit in Delhi.
Soon after the Lok Sabha results were announced on May 16, Ms Irani was at the centre of a raging controversy over her educational qualifications after it emerged that she had made contradictory declarations in her election affidavits.”In that kitty of mine where people call me ‘anpadh’(illiterate) I do have a degree from Yale University as well which I can bring out and show,” she said.
“Extraneous circumstances are being created so that I deviate my concentration from my goals,” she said at the event yesterday. The BJP leader said she should be judged from what she delivers as a minister.Ms Irani did not explain what the Yale degree was pertaining to, but she was part of a group of Indian MPs who took a crash course at the Yale University.
The 11 Indian MPs went to the Yale University campus in New Haven, Connecticut on June 19 last year to complete a six-day leadership program with the Yale faculty
The 2013 participants were drawn from five different national and regional political parties in India, and included Ms Irani, who was the BJP vice president at that time, and her Telugu Desam Party (TDP) counterpart C Ramesh.In addition to the BJP and the TDP, there were representatives from the Congress, the Trinamool Congress and Shiv Sena.
In the academic program, the delegation participated in discussions with the Yale faculty on nuclear non-proliferation; the democracy movement in the Arab world; women’s empowerment; elections theory and practices; political and economic developments in China; campaign finance reform; the environmental impact of shale gas development; Afghanistan and Pakistan after 2014; pharmaceutical innovation and patent law; and climate change mitigation.
The 2013 program was held in a new partnership with the Governance and Public Policy Initiative of the Centre for Policy Research in New Delhi. In all, more than 80 MPs fromIndia have participated since the program was introduced, eight years ago.
When pressed further at the summit to clear the air over her educational qualifications, Ms Irani told the questioner to file a Public Interest Litigation(PIL) if he wanted to know the truth about the poll affidavit controversy.”Please go and file a PIL against me in court, I shall give you your answer in court to settle this once and for all,” she said when asked about the authenticity of the two poll affidavits filed in 2004 and 2014.As a candidate in 2004 elections from Chandni Chowk in Delhi, Ms Irani had declared that she had a Bachelor of Arts(BA) degree.
“B A 1996 Delhi University (School of Correspondence)”, she had written in the column which seeks details of University education and the year in which the course was completed.In the same column of the affidavit filed in the 2014 elections from Amethi, Ms Irani had said, “Bachelor of Commerce Part-1, School of Open Learning (Correspondence), University of Delhi-1994”.Reacting to Ms Irani’s Yale link, the Congress asked why did she not mention this in her poll affidavit
“And our HRD minister forgot to mention her Yale degree in her affidavit this time. But all her affidavits have had different degrees, sigh,” Priyanka Chaturvedi, a Congress spokesperson, sarcastically tweeted.
“I repeat again. It’s NOT about the need of educational qualifications for a minister. It’s about her honesty, integrity and truthfulness,” said Ms Irani.