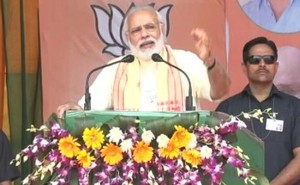 TINSUKIA(Assam): Prime Minister Narendra Modi tried to strike an instant bond with the people of Assam as he began his election tour of the poll-bound north eastern state with a rally in Tinsukia. Recalling his days as a tea-seller, Mr Modi said he shares a special bond with the people of Assam, a large tea-producing state. “It was your tea I sold to people and spent my childhood,” he said.
Mr Modi also gave a new slogan during the rally. “I am not fighting Gogoi but Gareebi (poverty),” Mr Modi said as he began his campaign for the BJP which hopes to wrest power from the Congress which has ruled the state under Chief Minister Tarun Gogoi for 15 years now.
At Tinsukia, which is also the Lok Sabha constituency of Union Minister for Sports and Youth Affairs Sarbananda Sonowal, Mr Modi projected his colleague as the future chief minister of the north eastern state where the BJP has never been in power.
“This election is going to cause a loss to Delhi. I am also going to be affected. One of the most important ministers in my government is Sarbananda. I will have to send him to Assam to serve the people,” Mr Modi said.
He pitched the 53-year-old Mr Sonowal against the 79-year-old Chief Minister. “Assam’s leader will be 90 years old in a few days. He says he’s fighting with Modi. I have respect for you Chief Minister ji. You are old,” Mr Modi said.
The party has decided to project Mr Sonowal as its chief ministerial candidate. “Assam is among the five poorest states in India. Assam was counted among the richest, who made it the poor?” he questioned.
“I want nothing more, give Sarbananda five years. This election will give Assam a young chief minister…The day is not far when children will be taught A for Assam in schools,” PM Modi said as he declared the development of Assam as his party’s only agenda. Unemployment among youth is a burning issue in the state which ranks among the five worst states on employment indices in the country.
Mr Modi in his election tour of Assam will hold seven rallies in two days. The party is contesting  91 of the 126 assembly constituencies in the state. The BJP won seven of the state’s 14 Lok Sabha seats in the 2014 general election securing a lead in more than half the assembly constituencies and polling nearly 37 per cent votes, seven per cent more than the Congress.